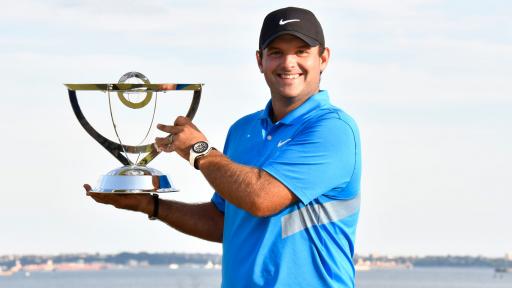 Patrick Reed went into Sunday's final round with a one shot lead over Mexico's Abraham Ancer, but there was a host of talent close behind, including Jon Rahm and Rory McIlroy, but Reed continued his fine form for the week to get over the line and win The Northern Trust at Liberty National.

Reed and Ancer were neck and neck for the final round on Sunday and both shot a two-under-par score of 69, leaving Reed 16 under for the tournament, one better than his playing partner Ancer.

Adam Scott shot the best score of the day, a six-under-par 65, climbing the leaderboard to finish in solo fifth place at 13 under par.

Reed's lead soon disappeared early into the final round, with back-to-back bogeys on the second and third holes, allowing Rahm to capitalise with three birdies on his front nine to take him to the top of the leaderboard.

Three birdies and three bogeys on Reed's front nine put the American back on track, before he birdied the 14th and saved a crucial par at 15 where he had missed the green.

Reed rolled it in for birdie on the 16th to take the lead and then tapped it in from three foot for par on 18 to confirm his victory, his first in over a year.

The win for Reed moved him into second place in the FedEx Cup standings, behind Brooks Koepka.

Patrick Reed - What's in the bag?

PGA Tour
Patrick Reed: How much is the 2018 Masters champion worth?
PGA Tour
Ian Poulter's son Luke set to caddie for him at Wells Fargo Championship
News
Strokes Gained Calculator released to help you track and improve your putting
The Masters
Golf fans react to Patrick Reed DUFFING a chip at The Masters
The Masters
Patrick Reed becomes brand ambassador for Castore sportswear