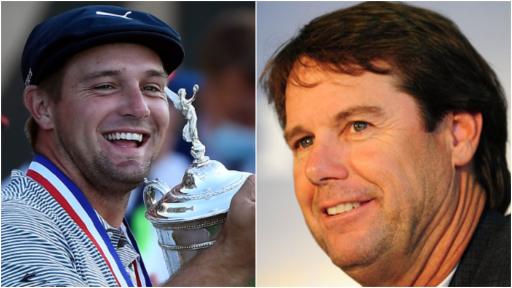 Paul Azinger has never been one to shy away from an absurd comment during an NBC telecast and the final round of the US Open was no different when uttering "validation on steroids" as Bryson DeChambeau clinched his maiden major title at Winged Foot.

DeChambeau was strolling up the final hole en route to a six-stroke victory in the 120th staging of the US Open as Azinger made his comment during the live broadcast.

The former US Ryder Cup captain has since received plenty of backlash for his unwelcome remark, but has since responded via a text message to Golfweek to clear up the context behind his words.

"If anyone was thinking I was implying that Bryson was on steroids they completely misinterpreted that," said Azinger.

"They get tested twice a week crying out loud. Bad choice of words.

"He took a look of (bleep) and validated everything he's done. If that needs cleanng up then the world has gone to hell."

Social media was quick to react to Azinger's comment, with some in total disbelief...

@PaulAzinger I’m sure by now you are regretting your comment about #steroids it’s obvious @b_dechambeau is doing things the right way.. congratulations to Bryson on his #USOpengolf win !!

Paul Azinger’s “steroid comment” was uncalled for and he should be reprimanded for it. #USOpengolf #BrysonDeChambeau #NBCSports

@usopengolf @USGA And here's what NBC commentator Paul Azinger said as DeChambeau walked up the 18th fairway with a 6-stroke lead at the US Open: "This is validation on steroids for Bryson." I couldn’t believe what he said.

Azinger came under fire earlier this year in March when referring to the likes of Tommy Fleetwood and Lee Westwood only being able to win on "that European Tour". Those comments did not sit well with Ian Poulter who wasted little time in blasting Azinger.

After quite the transformation this season, DeChambeau now stands a beefy 240 pounds after a pretty wild diet (apparently he drinks seven protein shakes a day) and training regimen.

As a result of piling on the pounds and building muscle, DeChambeau now has an impressive clubhead speed in the region of 140mph and a ball speed notching 200mph - something the professional game has never seen before.