Paulina Gretzky takes to Instagram to clear up those Dustin Johnson 'stairs' rumours from two years ago. 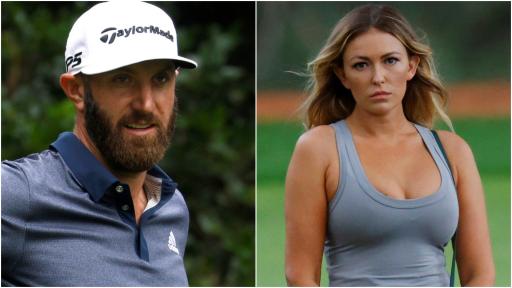 Paulina Gretzky opened the floor to her Instagram followers last night asking them to come forward with any questions they fancied. As you can imagine, there were a fair few pointed in the direction of her golfing fiance Dustin Johnson.

While Gretzky may have dodged any questions on what exactly happened between DJ and his so-called best bud Brooks Koepka at the 2018 Ryder Cup after-party, the model and pop star did not hold back when it came to the World No.1's famous 'stairs' incident ahead of the 2017 Masters.

DJ was installed as a red-hot favourite for his first Green Jacket at Augusta, but his chances went crashing down the stairs 48 hours before his opening tee-time. The big-hitting American gave things a shot on the practice range, but he was just in too much pain to contend and withdrew on the Thursday morning.

There have been a number of 'rumours' as to how and why DJ fell down the stairs at his rented Augusta apartment that week, but Paulina has now set the record straight having spent plenty of time listening to what she calls "entertaining lies."

"Like he [Dustin] said, slipping on the stairs," Gretzky replied to a fan's question on her Instagram Story.

"Tried to race outside to get our son from the car because it was storming out.

"But I've definitely enjoyed all the entertaining lies... I mean 'rumours'."

NEXT PAGE: THE THREE MASTERS RECORDS THAT DUSTIN JOHNSON CAN SHATTER AT AUGUSTA NATIONAL ON SUNDAY