Peter Kostis reveals the other times on the PGA Tour... 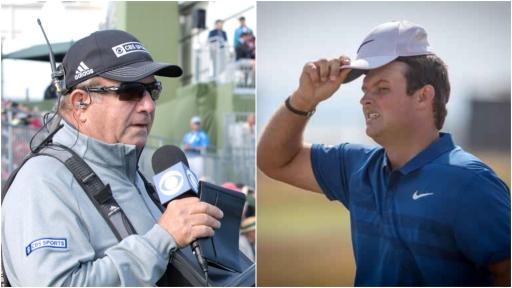 Just hours after Brooks Koepka revealed Patrick Reed definitely cheated at the Hero World Challenge in December, former CBS Golf analyst Peter Kostis has fired more shots the way of the ex-Masters champion following an interview on the No Laying Up podcast.

Quizzed on his thoughts about Reed's controversial two-stroke penalty in the waste bunker from three months ago, Kostis explained the incident was not the first time he had seen Reed adopt some shady business.

"You can go on YouTube. It's the only time I ever shut [commentator Gary] McCord up. He didn't know what to say when I said 'Well, the lie that I saw originally wouldn't have allowed for this shot.'

"He put four or five clubs behind the ball, kind of faking whether he's going to hit this shot or that shot or whatever.

"By the time he was done, he hit a frickin' 3-wood out of there. When I saw it, it was a sand wedge lay up originally."

Kostis added even more fuel to the fire when claiming he saw Reed pull another improved lie while he was watching him go about his business from the TV tower at the back of the 16th hole.

"He hit it over the green and did the same thing," said Kostis.

"He put three or four clubs behind the ball. It was really a treacherous shot. Nobody had gotten close all day long from over there.

"By the time he was done, I could read 'Callaway' on the golf ball from my tower."

LISTEN TO THE FULL 'NO LAYING UP' PODCAST HERE

Kostis did not stop there.

Apparently there was that time in Hartford at the Travelers Championship.

"I'm not even sure he knows he's doing it sometimes. I'm not going to assign intent. I'm just telling you what I saw."

When asked why he has never called out Reed for these past actions, Kostis explained he was not allowed to by his producers.

"I was told by Frank Chirkinian, the godfather of golf on TV, and this was kind of the unwritten rule, that we are there to report the story, not to be part of the story," revealed Kostis.

"He was adamant about that. We could never call a penalty on a player but we could comment if a penalty was called on a player.

"That's the difference. I couldn't say anything. I couldn't be the story. Now I'm done, I don't really care."