Phil Mickelson says "it's on" to golf match with Tiger Woods

Tiger Woods and Phil Mickelson will join Peyton Manning and Tom Brady for charity golf match in May... 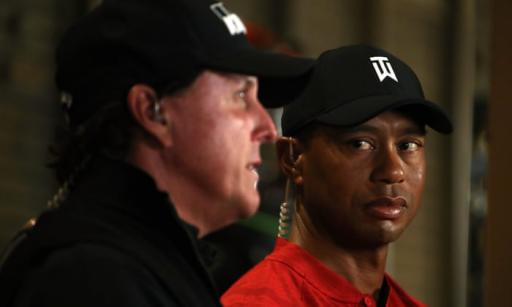 With news reaching us this morning that Tiger Woods and Phil Mickelson will take part in a charity golf match next month, what better time for us to launch our latest golf quiz featuring quotes from two of the game's greats.

Just simply tell us whether Woods said the quote, or Mickelson. You have a 50/50 chance on each question. Have a go below and let us know how you get on by heading over to our social media channels on Facebook, Instagram and Twitter.

According to Turner Sports, the match will be televised and both Woods and Mickelson will partner an NFL legend.

Woods will join up with Peyton Manning, with Mickelson alongside Tom Brady.

A venue has not yet been decided as discussions continue as to the safety of staging such a match during the coronavirus pandemic.

There is a strong suggestion that the match will be screened live on TNT, and that it will be held without any spectators.

Shortly after the Turner Sports announcement, Mickelson sent Twitter messages to Woods and Brady that read: “It’s on now."

Gov. Ron DeSantis of Florida said last week that he supported the return of sports contests during the pandemic and mentioned a potential Woods-Mickelson match.

“I’d like to see Woods and Mickelson do the golf, or whatever, because that’s social distance,” DeSantis said. “You wouldn’t have a gallery there. You wouldn’t have crowds. But to put that on TV, I think people have been starved for content.”

All money raised in association with the competition - which is titled 'The Match: Champions for Charity' - will be donated toward Covid-19 relief, Turner Sports said.

Mickelson won the last 'Match' against Woods with victory in extra holes, and he scooped a monster $9 million jackpot in the process.

Previous
World’s biggest golf lesson will take place on May 5
Next
Golf Psychology Series: Part One - Self Talk