NFL legends Tom Brady and Peyton Manning are going to join them too... 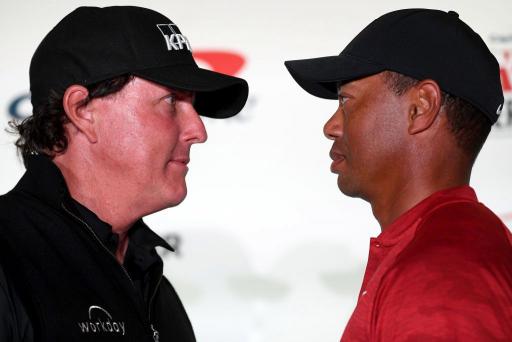 Tiger Woods and Phil Mickelson will reportedly renew their rivalry on the golf course in a coronavirus charity match at a Florida course in May, and they will be joined by NFL legends Tom Brady and Peyton Manning.

The unconfirmed match is expected to see Woods and Manning take on Mickelson and Brady, with the coronavirus relief effort being the beneficiary of such event.

Should this event take place, it will come 18 months after Woods and Mickelson competed in pay-per-view 'The Match' where Lefty ran out a victor in extra holes, taking home a lucrative winner's cheque of $9 million. The match also featured a number of side bets with several challenges on different holes.

The rumour of a Woods, Mickelson, Brady, Manning fourball was first started by veteran golf journalist Robert Lusetich, who tweeted: "Hearing Tiger v Phil II might indeed be happening as a pay per view event but that the caveat is that each will have a partner. Two names being mentioned? Tom Brady and Peyton Manning."

RELATED: TIGER REVEALS WHAT WENT WRONG IN HIS MONEY MATCH WITH PHIL!

Mickelson then gave things greater momentum by responding to a message that read: "Working on it."

A reader then messaged Mickelson with: "Please don't tease," to which the five-time major champion replied: "I don't tease. I'm kinda a sure thing."

It is anticipated that the PGA Tour and AT&T's WarnerMedia will be hosting the fourball match, but that it will not be a pay-per-view event.

Brady recently joined the Tampa Bay Buccaneers after spending 20 successful years with the New England Patriots, winning an NFL-record six Super Bowl titles, while Manning, who played for Indianapolis Colts and Denver Broncos, retired in 2016 as the NFL's all-time leader in passing touchdowns and yards. He is also the only five-time winner of the league's Most Valuable Player (MVP) award.

From our sources, both Brady and Manning's golf handicaps are similar with Brady off 9 and Manning off 8.

"Discussions along these lines have been ongoing for quite some time, but nothing has been approved by the tour," said a PGA Tour statement.

The event will feature a small production crew to film it and each individual will obey the social-distancing recommendations to stay six-feet apart, according to reports.

RELATED: CAN I PLAY GOLF DURING THE CORONAVIRUS LOCKDOWN?

I don’t tease. I’m kinda a sure thing

Social media has reacted to the rumours, with some in favour and some against the match, particularly given the current coronavirus pandemic that has brought an instant halt to playing golf for most people around the world.

Police have even been issuing warnings to golfers who think it's still okay to "nip out for a round of golf" in the United Kingdom this week with the country still in a strict lockdown.

Guardian golf correspondent Ewan Murray said: "I just think anything like this in the current climate would look poor, and I realise they'll donate to charity etc but can do that anyway."

What do you make of the rumours for this match? Share your thoughts and comments to this post on our social media channels.