TPC Sawgrass has seen it all. Re-live memorable moments from the flagship PGA Tour event. 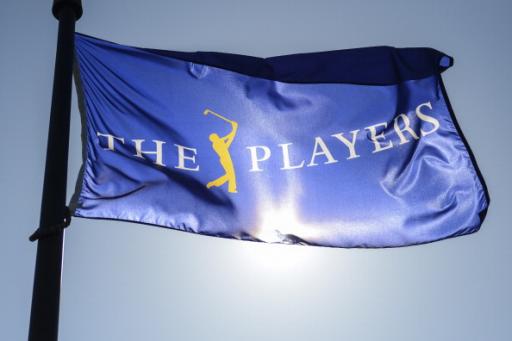 The Players Championship this week isn't classified as a major, but it's certainly treated like one.

Representing the PGA Tour's flagship event of the year, the "unofficial fifth major" never fails to deliver high drama simply because of its annual setting and water-filled finish.

This year, however, The Players reverts to a new date of March instead of its typical May slot following the PGA Tour's calendar reshuffle.

While Augusta National, home to the Masters, may be the most famous course in the world, the iconic par-3 17th at TPC Sawgrass is arguably the most recognisable and feared hole in golf - and it only measures a measly 137 yards.

Detractors label the hole gimmicky, saying it only needs a windmill or a clown's mouth to be complete, but love it or hate it, you cannot ignore it.

"It's like having a 3 o'clock appointment for a root canal," said Mark Calcavecchia.

From seagull claw cranes and victorious belly flops to tram-liner putts and "Island Green" drama, the Stadium Course has just about witnessed it all since staging the 42-year-old event as of 1982.

Let's take a trip down memory lane as we reveal our top 10 most memorable moments from the Players...

On the eve of the first ever Players Championship at TPC Sawgrass, Jerry Pate told the media he'd jump in the lake at 18 and take former commissioner Deane Beman and course architect Pete Dye in there with him.

And after firing a final round 67 to overhaul a three-shot deficit in the final round, enough for a two-shot triumph over Scott Simpson and Brad Bryant, the 1976 US Open champion upheld his promise.

The win would be Pate's eighth career win but his last on the PGA Tour. At least it was one he'll remember.

When Greg Norman was on his game back in the day, few stood a chance.

The Great White Shark didn't just take a bite out of TPC Sawgrass in 1994, he devoured it when posting the 72-hole tournament record at thePlayers of 24-under - a score that still stands the test of time.

Norman opened the tournament with a course-record 63, which has only ever been matched by Kaymer (2014), and then backed it up with a hat-trick of 67s for a four-shot triumph over Fuzzy Zoeller.

Reminiscing about his Open success a year previous, Norman took full advantage of what he called "soft conditions" and turned the Stadium Course into his personal playground.

"I drew on Royal St. Georges," he said, referring to the final-round 64 that delivered his second Open title. "Royal St. George's was a great advantage for me. I played with focus and control and dedication. That's the way I played today."

Remarkably, Norman made just one bogey all week at the 1994 Players, unluckily at the 13th in the final round.

Even when you find dry land at the 17th, you're not always safe. Just ask Steve Lowery, who had his tee shot stolen by a seagull.

As Lowery and his playing partners began walking to the green, a seagull landed on the dancefloor and began toying with Lowery's ball.

The bird dribbled, picked and then wedged the ball into its mouth, before losing control and dunking it in the lake.

While some of the rules of golf can be cruel at the best of times, golf's governing bodies have been kind where seagulls are involved. Under the rules, the ball was deemed to have been moved by an outside agency.

There are few players who can lay claim to toppling Tiger Woods for a title in heat of battle, but Hal Sutton is one of them.

And he took a great deal of pleasure in doing so, especially after Colin Montgomerie's comments when Tiger Woods - who had romped to a four-shot win at Bay Hill in his last start - carded an opening 69 that week.

"The view in the locker room without anyone saying it out loud, is that the tournament is finished," said Montgomerie. "It's like, who is going to finish second?"

Sutton responded in the only way he knew how: "Praising Tiger all the time is certainly [creating] a defeatist attitude.

"There are a lot of people who don't think they can beat him right down the stretch on Sunday. There's a lot of doubt in their minds."

Taking a one-shot lead into the final round, Sutton remained true to his own belief and was more than prepared to stare down Woods when push came to shove.

Despite Woods eroding Sutton's four-shot lead into a solitary shot standing on the 17th tee, Sutton remained composed and reeled off two pars to seal his second Players title, 17 years after his first.

"Be the right club, today," said a pumped-up Sutton, as he dispatched his approach inside of 10 feet at 18 to secure the win.

Tiger Woods has produced many extraordinary shots on a golf course before, but few rival his outrageous putt on the infamous 17th green during the third round in 2001.

The putt would also mark one of the most memorable calls in golf commentary.

While somewhat fortunate to hang on to the back edge, Woods faced a 60-foot downhill putt for birdie, with three breaks of slope to decipher. Yet in typical Tiger fashion, he read the putt to inch perfection.

The American would later appreciate the effort even more as he went on to land the first of his two career Players titles by just one shot over Vijay Singh on 14-under.

If you could find the golfing equivalent of Leicester City winning the Premier League, you'd probably look back at flash-in-the-pan Craig Perks when he landed the 2002 Players.

Perks, who now spends his career in the commentary box, went into the final round of the tournament one shot off the lead but looked to have surrendered the opportunity of maiden PGA Tour success when playing the first 15 holes in 3-over.

One putt on the final three holes will usually get it done, though.

Against all the odds, just like the Foxes, the little-known Kiwi chipped in for eagle at 16, buried a birdie bomb from 40 feet on 17, and holed out once more for par at the back of the 18th green.

Perks secured a two-shot win over Stephen Ames, but the victory would prove to be his sole career title.

The tournament engraver would been a little miffed had Adam Scott lost the 2004 Players, as he'd already etched the Australian's name on the trophy.

Leading Padraig Harrington by two shots up the final hole, Scott appeared to have one hand on the title when he blitzed a drive down the fairway.

With the whole of Florida to the right, Scott uncharacteristically pulled his 6-iron approach left into the lake, causing the engraver to frantically search for his P45.

"I was trying to punch the ball onto the right side of the green, take a couple of putts and get the win," said Scott.

"I was amazed to see that shot go left. My first thought after that was, we have a chip and putt for bogey and the win."

Scott dusted himself off, regrouped and took a deep breath, before playing a solid chip to within 10 feet of the pin.

Standing over a must-make bogey putt for his second PGA Tour career title at the age of 23, Scott could have been excused for a nervy stroke. But he was in no mood to think negatively.

"I was so calm over the putt, I don't know why" said Scott, who duly buried the putt for a one-shot win. "I surprised myself how calm I was. I was a strange feeling."

It's no secret: Sergio Garcia and Tiger Woods do not send each other Christmas cards.

After playing with each other in the third round of the Players, Garcia and Woods became embroiled in a tit-for-tat argument in the media centre when the Spaniard felt the American had distracted him during the round.

Much to every golf journalist's delight, Garcia, who labelled Woods "not the nicest guy to play with on Tour", was locked in a final-round battle with the 14-time major champion. Thankfully for them, there were in separate groups.

Garcia, who had defeated Paul Goydos in a playoff to land the Players in 2008, held every chance to land a second title in six years, but capitulated under the pressure at 17 when dumping two balls in the lake to gift Woods a second Players title.

Martin Kaymer was cruising by three shots after 14 holes when the hooter blew for inclement weather in the final round of the 2014 Players.

Only his game and mind did not quite appear the same when he came back to the course.

Kaymer pull-hooked his tee shot at 15, leading to a double bogey, and then made an indifferent decision to use putter when against the first cut of rough by the green on the must-birdie par-5 16th, which resulted in a par.

Standing on the 17th tee with a one-shot lead, the German narrowly avoided the water by inches, and then proceeded to duff his chip to some 30 feet of the pin, right on top of the slope, leaving a downhill left-to-right putt that many players had been failing to read correctly all day.

What followed would prove pivotal in the victory as Kaymer poured the putt into the centre of the cup - a stroke described by playing partner Jordan Spieth as "just a beautiful tracking putt as soon as it left the face."

Kaymer would go on to par the last and seal a one-shot win over Jim Furyk.

Rickie Fowler was labelled an underachiever on the eve of the 2015 Players Championship. He quickly put that survey to bed.

Rallying from a five-shot deficit with five holes to play, Fowler produced the greatest finish witnessed at TPC Sawgrass when finishing birdie-eagle-birdie-birdie for a 5-under 67, enough to force the tournament's first ever three-hole playoff with Kevin Kisner and Sergio Garcia.

On Sunday, Fowler birdied the 17th every time he was asked; once in regulation play, once more in the three-man playoff, and then again against Kisner in sudden death when firing his wedge to within six feet of the cup for a tournament-winning birdie.

"I'd say this was a pretty big one," Fowler said, tongue in cheek.