Rafael Nadal broke records at the Australian Open, but could his golf swing use some work?! 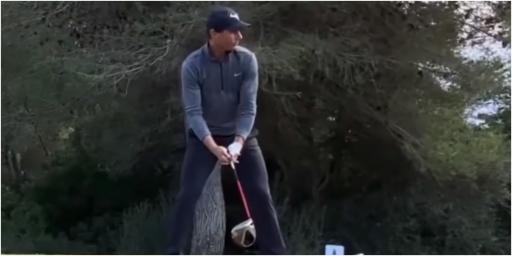 Rafael Nadal told the world during his bid for a record 21st grand slam the key to his fitness is playing golf.

That fitness ultimately paid off as he recovered from two sets down to defeat Russia's Daniil Medvedev at the Australian Open on 30 January.

Nadal's glistening career has now spanned more than 21 years which has seen him claim 89 ATP Titles to go alongside his grand slams.

You'd expect the wear and tear to have given him a few injuries. And it has. But he always looks in peak physical fitness.

"I play some golf," Nadal said on the court to thousands of fans. "That's the truth. I never have been a gym guy."

Nadal's comments also caught the attention of Sergio Garcia, who replied to the PGA Tour's Instagram post saying what a good player he is.

Nadal reportedly plays off scratch. And he definitely seems to be the type of player who understands the motto, "swing your swing".

Take a look at the swing and tell us what you think. He shifts nervously over the ball just like he does before he serves.

It's authentic, to say the very least. It looks very similar to a forehand pass down the line at Roland-Garros.

His swing caught the attention of a few, who bickered about whether or not he actually plays around the scratch mark.

We at GolfMagic love it. It doesn't matter how you hit ball, so long as you get it in the hole.

Next page: Rory McIlroy tries to avoid social media at all costs