Rory McIlroy on news and social media: "I avoid it at ALL COSTS"

Rory McIlroy revealed he used to just read the positive news and ignore the negative news during his career in which he has 20 PGA Tour wins. 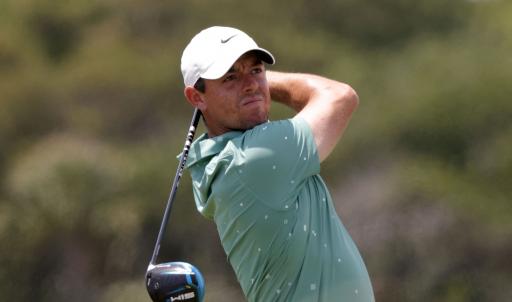 Rory McIlroy revealed that he never reads anything written about him, avoiding this and the whirlwind of social media "at all costs."

The Northern Irishman is one of the most talked-about golfers in the world. We have followed his career and grown up with him as he became one of the game's best players.

McIlroy's game is arguably one of the most scrutinised too. He has 20 wins on the PGA Tour and has spent 106 weeks at World No.1, the fourth-highest mark ever.

However, the four-time major champion has not won one of the sports' four premier events since 2014 and has played inconsistently in recent PGA Tour seasons.

Speaking to Golf, McIlroy addressed his name in the media as well as other subjects such as Tiger Woods and his caddie Harry Diamond.

"The one thing I will say is the less social media in this world, the better. I see the merits of it, but I think it has started to cause more harm than good."

When McIlroy won the CJ Cup back in October 2021, he became the second-youngest player from outside America to reach 20 wins on the PGA Tour.

When he is playing his best, there is arguably no golfer that can beat him. Each of the 32-year-old's major wins have been relentless and dominant performances.

It seems that most weeks, McIlroy discusses the complexities of his game and his swing which can't be that fun. Nonetheless, he revealed to Golf that he is at his happiest when he's on the golf course where he can avoid everything that comes with fame.

"What pops to mind is getting inside the ropes on tournament days, because it’s literally the one place on earth that no one can get to me. I don’t have my phone. I don’t have anything," McIlroy added.

"I used to love long flights because I could turn my phone off. Now I even have Wi-Fi on the plane. The course is the one place where you can just be. It’s a cocoon for four or five hours. I really enjoy that.

"I also appreciate the position that I’m in, and I try to wear it as well as I can if that makes sense. No one wears it as well as Steph Curry.

"Steph Curry loves being Steph Curry. And I love being who I am. But sometimes I resent it if I’m just trying to have a nice meal with my family or whatever. I’m not famous like Tiger Woods, but I’m probably more famous than most golfers, and I accept that."

NEXT PAGE: RORY MCILROY: I LOVE EVERY VERSION OF TIGER, BUT I LIKE THIS ONE