Rich Beem admits he didn't pay his son when he caddied for him and makes a hilarious comment about the Kuchar incident. 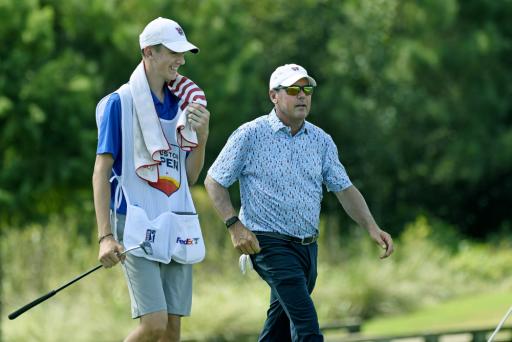 Matt Kuchar made the headlines last year at the Mayakoba Golf Classic, when he won the tournament and stiffed his stand-in local caddie by not paying the normal ten percent fee. With Kuchar returning to the event last week to defend his title and with El Tucan on the bag of someone else in the field, the story was of course being brought up once again.

Kuchar was absolutely rinsed for what happened last year and he recently admitted he regrets everything that happened following his victory, but now someone else has come clean about underpaying a caddie, in Sky Sports analyst and 2002 PGA Championship winner Rich Beem.

Beem was speaking to Brian Katrek and John Maginnes on SiriusXM PGA Tour Radio, where he revealed that he had also underpaid a caddie when he made a rare appearance on the PGA Tour at the Houston Open last month.

Now before you start tweeting your outrage, Beem's caddie at the Houston Open was his 16-year-old son, Michael. Beem finished in T55 place and his son Michael was told he'd receive 5% of his winnings, which would have worked out to be $850.

The hosts of the radio show asked Beem if he had paid his son for his caddying duties yet.

"Well, not yet, but Christmas is around the corner, so you never know," Beem said. "But he still has to earn his keep and all that."

The BEST clothing deals from Scottsdale Golf to start your year!
The Best Peter Millar golf deals to tee off your 2022 season
Katrek and Maginnes then joked about the timing of the news and compared Beem's situation to that of Kuchar, to which Beem reacted to brilliantly.
"Wow! Listen, if you're going to go there, let's at least get the story straight," Beem says. "One of us isn't a true major champion. And the fact that, listen, he only stiffed his caddie a little bit. I stiffed my caddie all of it."
Listen to the hilarious exchange below.

It's fairly ironic that @beemerpga joined @bkatrek & @johnmaginnes this week. Why? (Hint: Rich didn’t pay his son/caddy at the '19 Houston Open). Take a listen: pic.twitter.com/dX4cccprLx