Rory McIlroy couldn't believe the results he was getting with a club that shouldn't have found its way into his bag. 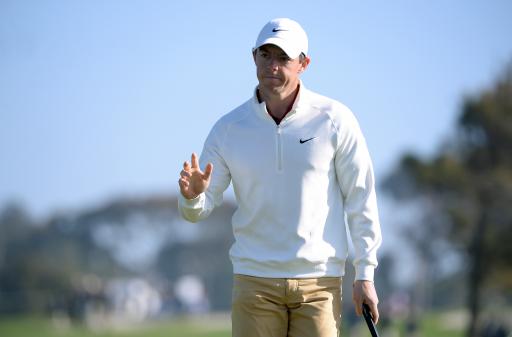 The new SIM family of irons and metalwoods was released by TaylorMade earlier this year and the brand's Tour players are loving the new equipment, but Rory McIlroy was in awe of a club that shouldn't have even been in his bag

TaylorMade's top Tour players recently featured in a video where they were putting the new SIM equipment to the test at the company's headquarters in Carlsbad.

Each player was given a Tour bag filled with the new SIM equipment for the likes of McIlroy, Tiger Woods and Dustin Johnson to try.

Usually, brands don't even bother showing their players rescue woods as the top players tend to prefer hitting long irons before moving up to their fairway woods.

TaylorMade happened to have the new SIM Max Rescue on hand and thought they'd put them in the bags to see if any of the players took an interest and it immediately caught the eye of the world No.1.

McIlroy loved the look of the hybrid and once he hit one shot with the new rescue club, he couldn't put it down. Watch the video for yourself below:

It will be interesting to see if the new rescue wood from TaylorMade makes its way into McIlroy's bag at some point this season, with the Masters being a possibility as it could give McIlroy a fantastic fairway-finding option from the tee.

About the TaylorMade SIM Max Rescue

As a long-iron replacement, it’s imperative that hybrids be versatile and playable in all conditions. That’s why TaylorMade has incorporated V Steel technology into a hybrid for the first time in the company’s history with SIM Max Rescue. The clubhead is engineered to deliver improved turf interaction and reduced friction when playing from various lies. A reshaped leading edge works in conjunction with V Steel to further improve playability and strike conditions.

Designers rounded the toe and adjusted the face angle to give SIM Max Rescue a more confidence-inspiring shape at address for all levels of golfers. It utilises the same C300 Steel face used in the SIM Max fairway woods to help improve ball speed, durability and overall performance. The corrective technologies of Twist Face and Speed Pocket offer improved performance and forgiveness on mis-hits on the toe, heel and low on the face.