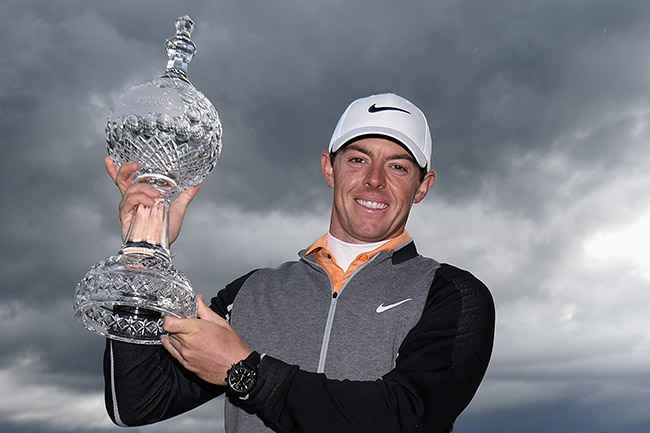 Rory McIlroy bested inclement weather conditions and a fiercely competitive field to win the Irish Open, hosted by The Rory Foundation, and claim his first victory of the season.

Cheered by passionate Irish fans at the famed K Club in County Kildare, McIlroy secured the win on the final three holes.

Standing with a one-shot deficit on the par-five 16th hole, he fired an awe-inspiring shot with a Nike Vapor Speed fairway metal from 271 yards to the green, walking off with a two-putt birdie. A par four followed before a precise 253-yard approach to the par-five 18th nestled two feet from the cup. McIlroy holed out for eagle to win the tournament by three strokes.

“I don’t know if I can put it into words," said world number three McIlroy.

"As you’ve seen over the years, I don’t really get emotional when I win but I was trying to hold back the tears there on the 18th green. I looked up, saw all my friends and family, and to win in front of them — I don’t get a chance to play in front of my home fans very often — so to play like that and to finish like that… I’ll never forget it.”

The Northern Irishman was outfitted head to toe in Nike Golf  apparel, footwear and equipment. His work off the tee with the Nike Vapor Fly Pro driver was impressive all week, averaging 293 yards in distance. He also finished top in greens in regulation.

McIlroy relied on the stability offered by the RZN Tour Platinum golf ball as he tackled the wind and the rain. Four key technologies — RZN 4.0, Speedlock X Core, Speedlock Mantle and Flight Suit Cover — combine to offer added yardage and a softer feel, versus the previous RZN Platinum ball.

The tournament was hosted by The Rory Foundation, a non-profit charitable trust that seeks to advance opportunity and lasting change for children suffering from ill health, who are unfairly disadvantaged or vulnerable to life’s circumstances. McIlroy will be donating his winner’s prize fund to the foundation.

“The ovation I got when the ball landed on the 16th green sent shivers down my spine. It’s just incredible to play in front of these crowds; they’re so knowledgeable about their golf and, come rain or shine, they come out in droves to support. For everyone who is watching at home and everyone who is here, thank you for supporting this event. It means an awful lot to the players, but it means an awful lot to everyone else and buying a ticket this week goes a long way to helping children who really need it,” said McIlroy.

Rory McIlroy: In the bag