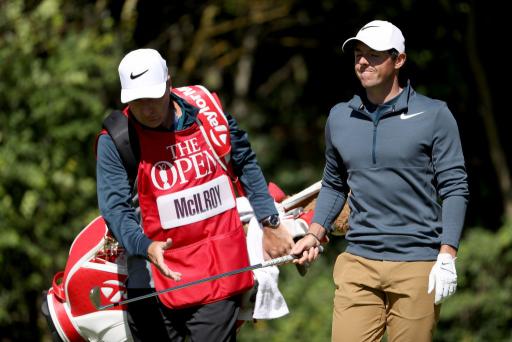 UPDATED: MCILROY ON AXING CADDIE - "I WAS GETTING MORE FRUSTRATED WITH JP THAN I WAS AT MYSELF"

Rory McIlroy has sacked his long-time caddie JP Fitzgerald, according to Reuters, ending a nine-year partnership that took the Northern Irishman to four major titles and to world number one.

McIlroy, 28, is reported to have a new caddie on the bag starting at this week's WGC-Bridgestone Invitational at Firestone CC, just one week before the year's final major, the US PGA Championship, at Quail Hollow.

The news marks the second big player-caddie split following the decision of Phil Mickelson and Jim 'Bones' Mackay to call it quits after 25 years together.

While McIlroy will no doubt have a list of caddies at his disposal right now, the one standout caddie without a current player would now appear to be 'Bones'.

They certainly get on, judging from what we saw at the US Open in June, but we'll just have to wait and see on that one...

There has been no immediate response from McIlroy's management to an e-mailed request for comment late on Sunday.

According to the report, Mcllroy is expected to confirm the caddie transfer shortly in Ohio.

The axing comes just a week after the Ulsterman publicly praised his bagman for giving him the kickstart he needed in the first round of the Open Championship.

McIlroy was 5-over through six holes at Royal Birkdale but recovered, thanks to some hairdryer treatment from Fitzgerald, to finish in a tie for fourth.

And it could have been better, had he not lost his golf ball on the 15th in the final round - which may well have been stolen by this chap.

McIlroy, who employed Irishman Fitzgerald shortly after turning professional in 2008, won all four of his major titles with him on the bag and enjoyed a combined period of 95 weeks as world number one spanning March 2012 to September 2015.

Winless since bagging the Tour Championship in September 2016 en route to landing the lucrative FedEx Cup, McIlroy had missed three of four cuts prior to finishing tied fourth at the Open Championship.

Forbes estimates that Fitzgerald earned $1.65 million from his cut of McIlroy's prize money over the 12 months to June this year.