McIlroy endures horror start with quadruple-bogey eight at Royal Portrush, and social media is all over it... 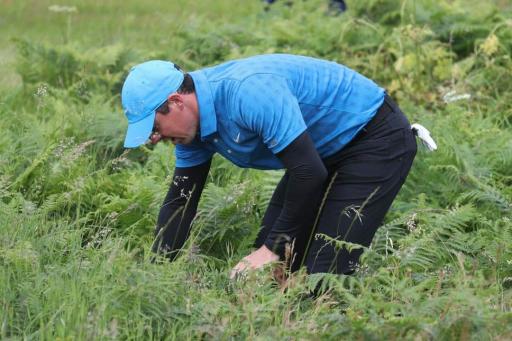 Rory McIlroy had been waiting for this moment all his golfing career. An Open Championship in his backyard with thousands of home fans spurring him on for a second Claret Jug. Unfortunately, his chances of victory may very well have ended at the first hole of the tournament.

McIlroy sent his tee shot OB  - just as he did in practice on Wednesday - while smashing a lady's mobile phone screen in the process.

He then sent his provisional in the rough, before sending another iron into the rough which led to an unplayable and dropped shot. After another swipe from the deep rough, McIlroy then finally got his ball onto the green only to miss the six-foot putt and it resulted in a quadruple-bogey eight.

McIlroy then made par at the reachable par-5 second, before making a bogey at the par-3 third when coming up short with his chip shot from behind the back of the green.

The Northern Irishman played himself into yet more trouble at the fifth when sending his tee shot into the deep rough.

After witnessing his horror start, social media - as you can probably imagine - was going to town on the Northern Irishman.

Let's take a look at some of the tweets...

Rory McIlroy starts with a quadruple-bogey 8 on the first hole. Still might shoot 61, but then he’ll have to make the turn.

I was going to watch all your shots at the open but I haven't got all day.

When you’ve fired a tenner on @McIlroyRory to miss the cut @TheOpen.... pic.twitter.com/5fmJsFt4CU

Rory McIlroy doing exactly what I'll be doing at Captains Day tomorrow. +5 thru 3.

Bet he doesn't NR thou