"We are trying to build Team USA golf all year round" 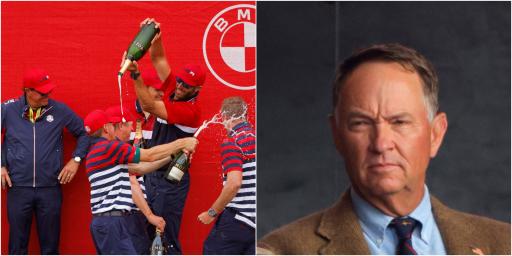 Davis Love III has revealed even as the United States team was in the midst of their Ryder Cup celebrations he left the party at midnight so he could turn his attentions to the Presidents Cup.

The incoming captain will spearhead the US defence at Quail Hollow next year against an international side captained by Trevor Immelman.

As the United States poured champagne down each others' throats, smoked cigars, danced and sang Love III left the party early.

"We just got done with it on Sunday, and the guys said, 'Are you going home? What are you doing?'" Love told the PGA Tour official website.

"They get to do it every year, they shift gears, but we are trying to build Team USA golf year-round.

What an amazing par save for Davis Love III!

RELATED: HOW MUCH DID EACH PLAYER EARN AT SANDERSON FARMS?

Love left Wisconsin and met up with Immelman over the weekend for some press duties at a Nascar race while they also stopped off at the home of the NFL side Carolina Panthers.

The 2022 Presidents Cup will mark the third time Love has captained a United States team. He's won one Ryder Cup at Hazeltine and was the skipper when they lost at Medinah.

Love, 57, has been a vice captain on three Presidents Cup teams and twice at the Ryder Cup.

The hall of famer also told the official website one of the key reasons he thought the United States did so well at the Ryder Cup.

He said Steve Stricker deliberately kept formal dinners and "rah-rah speeches" to a minium, adding: "Maybe it makes them nervous."

"It was a weird Ryder Cup for the veterans like us. Where's the pomp and circumstance? But it was also weird that they were always ready to go - and they played unbelievable," he said.

NOW WATCH: IS THIS THE LONGEST ANYONE HAS TAKEN TO HIT A TEE SHOT?!