WATCH: Is this the LONGEST a professional golfer has ever taken to hit a shot?

"After the 20th waggle it should be a justifiable homicide." 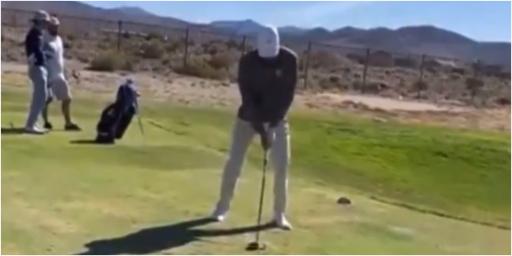 Something happened to me over the weekend that led me to question the longest I've ever been on a tee box.

In the howling wind and rain, already several shots above my 12.1 handicap, one of my playing partners pegged it up on the 13th hole.

A relatively difficult par-3 at 165 yards, into a strong wind and my partner is hesitant as the wind is picking up.

I'm switching clubs, he said, before telling the other member of our group to hit his ball if he is ready.

Our third member of the group also steps up and assesses the situation after teeing up his battered old Srixon Q Star Tour.

Just like our first member of the group he too is hesitant and wants to club up too and hand me the honour.

Questioning my sanity, I thought to myself: Is this the longest I have ever waited on a tee-box?

We all had a good laugh when we all knew what was going to happen - we'll be lucky to escape with a bogey.

But then I got home and scrolling social media I came across this video on Twitter.

Great video from 1st Stage of Q-School last week that shows how a #pro goes through his #routine. 1) Process your swing thoughts 2) Pull the trigger! pic.twitter.com/RzB6qNvgFM

Then I realised this young professional had taken the longest time in the history of the game to pull the trigger.

This really takes the biscuit.

Posted by @ClubProGuy, our hero is a professional playing in a Q School event.

He waggles over the ball for some 47 seconds before finally unleashing.

Just a shame it'll probably be dark by the time they get to the clubhouse.

A mixture of replies summed up what the majority of social media users thought:

After the 20th waggle, it became justifiable homicide.

Love the dude in the background, graciously waiting to pull something out of his bag, for fear he would distract his playing partner, only to eventually be like fuck this.