Tiger Woods and Patrick Reed in rematch with Tommy Fleetwood and Francesco Molinari... 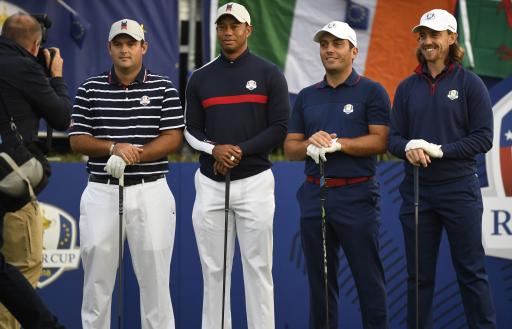 Tiger Woods and Patrick Reed will get their chance at redemption when facing Tommy Fleetwood and Francesco Molinari in the Ryder Cup Fourballs on Saturday morning.

Woods and Reed went down 3&1 to the European duo who have taken two points from two, following their emphatic afternoon victory over Jordan Spieth and Justin Thomas 5&4.

Despite losing the opening fourballs 3-1, Thomas Bjorn's European side recorded the first ever European whitewash in a Ryder Cup foursomes session on Thursday afternoon to move 5-3 ahead going into the weekend.

Other mouth-watering clashes include Rory McIlroy joining with Sergio Garcia for the first time to battle Brooks Koepka and Tony Finau, who won their sole match together in the Friday foursomes.

English duo Paul Casey and Tyrrell Hatton are back together and will face Dustin Johnson and Justin Rose, while Ian Poulter and Jon Rahm have been paired together for the first time to take on Jordan Spieth and Justin Thomas in the final match of Saturday morning.

Unsurprisingly, Phil Mickelson and Bryson DeChambeau have been dropped following their indifferent performance on Friday afternoon.