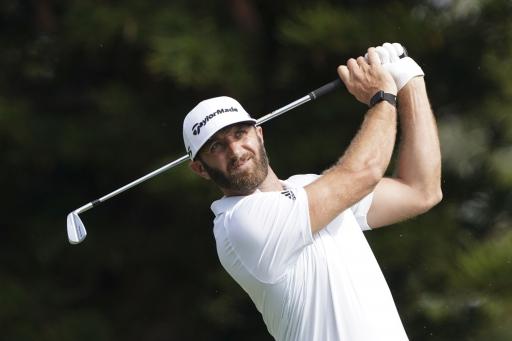 Who said money can't buy you happiness the world's best golfers? Welcome to the Saudi International, no doubt soon to be labelled by some players as the unofficial fifth major of the year.

If you're anything like me, you will be reaching for the mute button - once you can find it - when it comes to listening to the world's best players discuss how much they enjoy being part of this week's tournament (in just its second year), and how much they each want to help grow the game in Saudi Arabia. Oh come on, pull the other one.

Last year's inaugural Saudi International received plenty of consternation as it fell several months after the death of journalist Jamal Khashoggi, who had spoken out against Prince Mohammed bin Salman in Washington Post columns.

It led to a huge outcry from golf fans and the industry at large who were ashamed to see so many of the world's best players aligning in Saudi Arabia while picking up huge pay packages just to compete in the European Tour tournament.

Twelve months on, the story is fairly similar.

According to Amnesty International, the world's top golfers competing this week should be speaking out about Saudi Arabia's "abysmal" human rights record.

"As with a whole host of other sports, the Saudi International is clearly another attempt by the Saudi Arabian authorities to try to 'sportswash' the country's heavily-tarnished image," said Felix Jakens, Amnesty International UK's head of campaigns.

"It's yet another attempt to use the glamour and prestige of top-tier sport as a PR tool to distract from Saudi Arabia's abysmal human rights record.

"Under the Saudi Crown Prince, there's been a sweeping human rights crackdown - with numerous peaceful activists jailed, including Loujain al-Hathloul and other women's rights defenders.

"There's been a whitewash over Jamal Khashoggi's murder, there are continuing concerns over Saudi hacking, and the Saudi-led military coalition in Yemen has a bloody record of launching indiscriminate attacks on homes, hospitals and market-places.

"We'd ask everyone involved in the Saudi International to properly familiarise themselves with the dire human rights situation in Saudi Arabia and be prepared to speak out about it."

Putting all politics to one side, you have to believe the only reason the likes of Dustin Johnson, Brooks Koepka, Patrick Reed and Phil Mickelson are in the field this week is to pick up weighty pay cheques in the region of $500,000 and $1 million. Some reports claim defending champion Johnson and World No.1 Koepka could be in for even more than that.

It's fairly evident some of the biggest names in golf are here because they know they will get to pad their already healthy bank balances just for turning up and taking a general interest in Saudi Arabia at large.

It has the feel of when Alexis Sanchez joined my beloved Manchester United two years ago, signed his £300,000-a-week contract and said: "It's always been a dream of mine to play for this club ever since I was a young boy." Course it was, when you had the chance to join us in 2014 but decided to go to Arsenal.

In my eyes, if the likes of Koepka, Johnson, Reed, Mickelson and others really wanted to make a difference to golf in Saudi Arabia and make  their mark, then they would pass up their pre-tournament pay cheques and just give them to junior golf centres or facilities in the country.

The PGA Tour outlaws appearance fees in the belief that doing so provides some protection for the success of tournament, and I have to say I love that stance.

Pre-tournament apperance fees do nothing for the look of our sport.

Patrick Reed was spotted going to revisit schoolkids in Saudi Arabia earlier today, just like he did last year. No doubt in the Ts & Cs of his pre-tournament contract. Yes, a nice touch from 'Captain America', but let's be honest the majority of kids probably had no idea why they were suddenly being told to put their fingers over their lips during a photoshoot.

"Because of the great times we had last year, we wanted to get back here and show them how much we appreciated their support so we gave every child a Team Reed T-shirt," said Reed. "We had a blast, and can't wait to do it again."

Of course you can't wait to do it again Patrick, especially when there are six figures on the line.

Then there's Koepka and Johnson, who both told the media today how happy they were to be back in the country and what winning the tournament would mean to them.

Both Americans then spoke about how difficult it was for them to balance a worldwide schedule with so many different events during the course of their season - something they consider is more than likely going to jeopardise their chances of playing for the United States Olympic team. Of course it's all good when the Saudi International comes knocking, with a lucrative pay cheque lying on the doormat.

I'm sure if all Olympians were paid $1 million just to turn up in Japan they would suddenly take an interest in a gold medal, not to mention the general area of Tokyo.

RELATED: BROOKS AND DJ CLAIM TO BE NOT FUSSED ABOUT THE OLYMPICS

At least the likes of Tiger Woods and Rory McIlroy were honest in their assessment when both turning down in the region of $3 million to compete in the tournament this year.

"I just don't want to go over there, it's a long way," said Woods. "It's traditionally not a golf hotbed, the Middle East."

An insider for McIlroy's refusal told The Telegraph: "It doesn't matter what they'd offered, Rory was going to say no anyway."

Paul Casey was another big name player to turn down competing in the tournament, with his reasons solely down to being a UNICEF ambasassdor. Many other players cited similar political and safety reasons for not wanting to travel to Saudi Arabia.

Elsewhere, Sergio Garcia is back for another crack at the title but has decided to give back his pre-tournament pay cheque in the region of $500,000.

Yes a nice gesture from the Spaniard, but only as he goes in search of forgiveness for throwing his toys out the pram during last year's inaugural staging of the tournament where he was disqualified for 'serious misconduct' by the European Tour.

Then there's Mickelson, who is receiving quite possibly the most controversial pre-tournament pay cheque in the history of the sport.

Mickelson was slammed on social media for bypassing his home Phoenix Open and adoring fans in favour of a first trip to Saudi Arabia.

It is rumoured Lefty was only approached by tournament organisers with a hefty appearance fee because McIlroy had turned them down, and no other big names in the game were interested.

The 44-time PGA Tour winner grew up playing golf at TPC Scottsdale while a member of the Arizona State golf team, but decided to skip the tournament he has played every year for 27 years in favour of the Saudi International.

Of course, we had to sit through more baloney from Mickelson as to why he decided to turn up.

"I am really looking forward to playing in Saudi Arabia," said Mickelson, a three-time winner of the Phoenix Open.

"I watched Dustin win the title last year and thought the course looked like an interesting challenge. Having so many talented players on show made it look like a much more established tournament than one in its inaugural year.

"I have enjoyed my previous visits to the Middle East and am looking forward to playing in a new country and doing my bit to grow the game in the Kingdom."

Now I know Mickelson has been struggling for form of late, and starts a weak 70/1 outsider to take home the first prize of more than $500,000 this week, but let's be honest, this guy sits second behind Woods in career money on the PGA Tour with just shy of $100 million. I think he will be okay for another week.

It will be interesting to see what happens over the next 12 months when a proposed Premier Golf League for the world's best 48 players in the game swings into town - an 18-tournament series running from January to September that will go up against the PGA Tour's FedEx Cup and European Tour's Race to Dubai.

And yes, you guessed it. That too is being funded by Saudi money.