Mickelson gets SLAUGHTERED on Twitter for favouring Saudi over Phoenix

Phil Mickelson will miss the Phoenix Open for the first time since 1992 so he can play in the Saudi International... 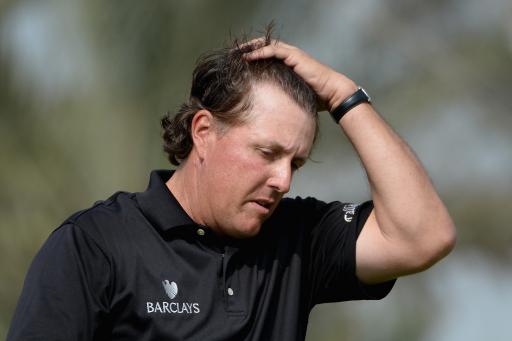 Phil Mickelson would appear to have lost a number of fans following his decision to bypass the Phoenix Open on the PGA Tour - an event he has played 27 consecutive times since turning pro in 1992 - in favour of the controversial Saudi International on the European Tour.

The tournament has held a special place in Mickelson's heart, especially with it being staged every year at TPC Scottsdale where he grew up playing the game while a member of the Arizona State golf team.

But the American revealed on Sunday evening, much to the surprise of the golf universe, that he was going to skip the tournament he has favoured every year for the past 27 years as a PGA Tour pro and instead travel over to Saudi Arabia to compete in the Saudi International, a tournament that welcomes just its second ever staging of the event on the same week as the Phoenix Open (January 30 to February 2).

RELATED: SERGIO GARCIA COMMITS TO 2020 SAUDI INTERNATIONAL, BUT WILL NOT PICK UP HIS WHOPPING APPEARANCE FEE!

"I am really looking forward to playing in Saudi Arabia in January," said Mickelson in a statement that confirmed his entry alongside World No.1 Brooks Koepka and defending champion Dustin Johnson.

"I watched Dustin win the title last year and thought the course looked like an interesting challenge.

"Having so many talented players on show made it look like a much more established tournament than one in its inaugural year.

"I have enjoyed my previous visits to the Middle East and am looking forward to playing in a new country and doing my bit to grow the game in the Kingdom."

Mickelson has since responded to his critics, by saying: "After turning down opportunities to go to the Middle East for many years, I'm excited to go play and see a place in the world I've never been. I understand those who are upset or disappointed. You'll be ok. I'm excited to experience this for the first time."

Given that I turn 50 this year, there’s a good chance I’ve played my last Phoenix Open. We’ll see.

After turning down opportunities to go to the Middle East for many years, I’m excited to go play and see a place in the world I’ve never been. I understand those who are upset or disappointed. You’ll be ok. I’m excited to experience this for the first time.

As for not competing in the Phoenix Open, the tournament scheduled for the same week, Mickelson tweeted: "Given I turn 50 this year, there's a good chance I've played my last Phoenix Open. We'll see."

It is estimated both Koepka and Johnson, who are both battling knee injuries at the moment, will pick up appearance fees to compete in the Saudi International of around $1 million - so we imagine Mickelson will be not too far away from that number.

Sergio Garcia reportedly walked away with a $500,000 appearance fee in the inaugural 2019 tournament, despite being disqualified from the tournament for "serious misconduct" when tearing up greens in frustration.

RELATED: SERGIO REVEALS REAL REASON HE FLIPPED OUT IN SAUDI!

It's fair to say Mickelson's decision has not sat particularly well with a number of golf fans on social media this week - many of whom consider Lefty's decision is solely based on a huge appearance fee to compete in the Saudi International.

And let's not forget Mickelson isn't short of a dollar or two having amassed more than $90 million in career PGA Tour earnings, which lies second behind Tiger Woods ($120 million).

Here's a look at a selection of tweets across the golf industry and among golf fans...

I could, but given the opportunity I have to go play and compete while visiting, your recommendation just seems stupid to me.

By agreeing to play in Saudi Arabia he has lost my respect. Shame...

Wow Phil. I expected better from you. Disappointing.

Phil going to see that part of the world is the same as Trump saying he cares about corruption. It's all about the bank accounts. Seeing as he's already filthy rich, this decision is definitely puzzling...

Many of the local younger fans ,would so enjoy the opportunity to see the legend @PhilMickelson , while he is still capable of playing at a high level. He still had @GrayhawkGolf on his bag ! https://t.co/oMhw0CM4jr

Come on now, the poor guy has only made hundreds of millions playing a game for a living, if Phil needs to be a propaganda tool for a murderous psychopath who likes to torture and murder journalists for a little extra cash who are we to judge?

@GeoffShac @AlanShipnuck @tuckerdalebooth @fromthebacktees @shanebacon I am no longer an @PhilMickelson fan. To turn your back on a tournament, in your adopted hometown of Phoenix is disappointing. Saudi Arabia? Really? I know where I was during 911 ,do you? How much $ is enough?

They must be paying you a huge fee to go there, your real fans are in Phoenix if you still have them after this shitty decision and phoney rational about it.

This is just a gross response to a gross decision to support a disgusting regime. At least we know what you think is important.

Mickelson last year skipped his home Farmers Insurance Open at Torrey Pines, a tournament he had missed for the first time in 28 years.

The five-time major champion fell out of the world's top 50 for the first time in more than 25 years earlier this season, and he currently looks on from 58th in the world.

Garcia has also committed to playing in the 2020 Saudi International, despite being disqualified for "serious misconduct" when tearing up several putting greens in frustration during the inaugural 2019 tournament.

This year's tournament caused plenty of controversy as it fell several months after the death of Jamal Khashoggi, a journalist who had spoken out against Price Mohammed bin Salman in Washington Post columns.

The Masters
Will Zalatoris has a brilliant Happy Gilmore quote stamped on his wedge
The Masters
Jordan Spieth reveals he felt "mental fatigue" during Masters weekend
The Masters
Billy Horschel caught doing the WORST STROP of the season during The Masters
The Masters
Xander Schauffele on Masters agony: "I might be tossing and turning"
PGA Tour
Shane Lowry without regular caddie until The Open due to Covid restrictions