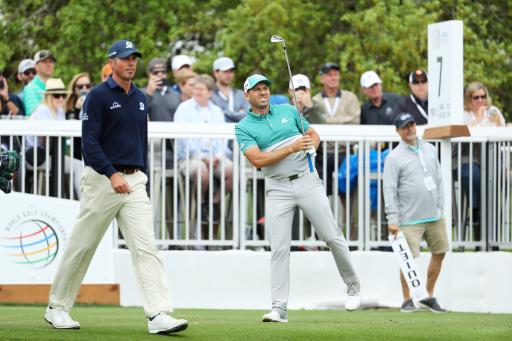 It's fair to say Matt Kuchar and Sergio Garcia have caused the two biggest controversies in the world of golf in 2019, so we probably should have expected more of the same when the duo were locked in battle during the quarter finals of the WGC Match Play on Saturday.

Garcia faced a seven-foot putt for par to win the hole at the par-3 7th but missed his putt to the left.

Frustrated at missing his putt, the Spaniard went to tap-in the putt left-handed and lipped out. While just inches away from the cup and seemingly a gimme, Kuchar did not have chance to concede Garcia's second putt.

WATCH: SERGIO GARCIA DQ'D AFTER TEARING UP THE GREENS!

As a result of the incident, Garcia lost the hole. Kuchar told the official he wanted to give Garcia the putt, but it could not be done retroactively.

"As I looked up again, I saw he had missed the next one," said Kuchar. "I said 'Sergio, I didn't say anything [regarding a concession], I'm not sure how this works out'. I didn't want that to be an issue."

RELATED: STAND-IN CADDIE FUMING WITH KUCHAR OVER HIS PAY CHEQUE!

Watch the full incident below...

Matt Kuchar did not have a chance to concede Sergio Garcia's second putt.

Kuchar told the official he wanted to give Garcia the putt, but that cannot be done retroactively. pic.twitter.com/AJFF8N5J7h

Garcia was then fuming with Kuchar on the next hole, claiming he should have given him the next hole as an act of sportsmanship.

"He knew he made a mistake," said Kuchar. "I didn't want that to be how a hole was won or lost."

On conceding a hole back to Garcia, the American explained he was not comfortable with that idea.

"I thought about it, and I said I don't like that idea."

Watch what happened down the eight hole here...

"If that were me I would have given you a putt on the next hole," says Sergio. Oooo this is getting nasty. #WGCMatchPlay #DellMatchPlay

NEXT PAGE: GOLF GIMMES... ARE THEY GOOD FOR THE GAME?