Seven members of US golf team killed in Texas crash

Seven members of the University of the Southwest's men's and women's golf team have tragically died in a crash. 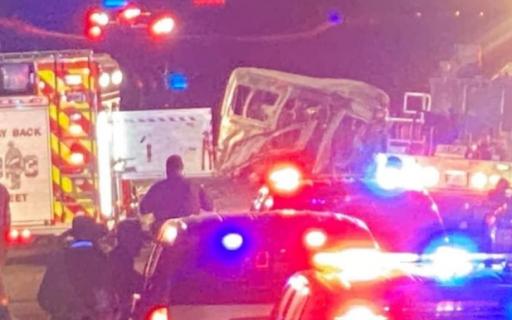 Seven members of the University of the Southwest men's and women's golf teams have tragically died in a crash.

According to reports, a vehicle carrying members of both the men's and women's golf teams collided head-on with a pickup truck in west Texas on Tuesday.

Updated: 13-year-old was driving the pickup truck that killed six golf students and their coach

It is understood that nine people have died in total, and two more are in critical condition.

Six members of the golf team and their head coach Tyler James were killed.

The golf team had been travelling back to campus having just played in a competition.

#UPDATE: from @AlexCammarata_ and @Cory_Mose on scene. They tell us the crash was a head-on collision between a 17-passenger van and a Fire F150 truck.

There are multiple fatalities, however due to the nature of the crash, DPS cannot say how many at this time. pic.twitter.com/VnEWiH5uKy

"The USW campus community is shocked and saddened today as we mourn the loss of members of our university family," read a statement on the university's Twitter account.

"Last night, the men's and women's golf teams were travelling back to campus from competition in Midland, Texas, when their bus was struck by oncoming traffic.

"Nine passengers, including the coach, were on the university bus involved in the fatal accident.

"While the accident investigation is still underway, reports indicate that seven passengers aboard the bus were killed in the crash.

"Two of the passengers are in critical condition undergoing medical treatment in Lubbock, Texas.

"USW is co-ordinating with Texas DPS to assist with the investigation and public information efforts.

"University administration is communicating with families of the students and coaching staff to provide more information as it becomes available.

"USW counseling staff and the worship team will be available on campus today to provide support for students, faculty, and staff.

"Please keep the families of students, coaching staff, and the USW community in your prayers as we come together to support one another during this difficult time."

The crash happened in Andrews country after the pickup truck crossed the center line and crashed into the vehicle carrying the golf team.

"We are still learning the details about the accident but we are devastated and deeply saddened to learn about the loss of our students’ lives and their coach,” said Quint Thurman, the university's president.

Sergeant Steven Blanco of the Texas Department of Public Safety said: "It's a very tragic scene. It's very, very tragic."

The crash is still under investigation, added Blanco.

University of the Southwest is a private Christian university in Hobbs, New Mexico, near the state's border with Texas.

The university was incorporated under as College of the Southwest in 1962, although the college had existed for several years prior as a two-year Baptist educational institution.

Our thoughts are with all the families and friends of those that have tragically lost their lives. RIP.