Shane Lowry: "The ref didn't have the balls to make a decision" at PGA

Lowry angered by PGA rules official: "Any good referee would have given me full relief." 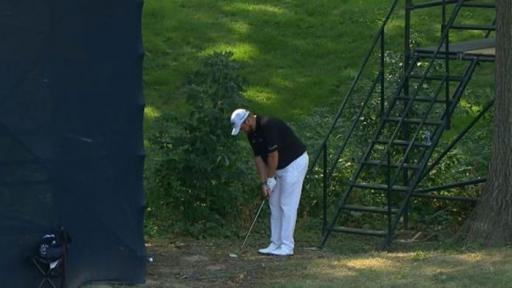 Shane Lowry has revealed his anger at not being given full relief when his ball came to rest next to a camera tower at the par-3 16th in the final round of the US PGA.

While unclear exactly what was happening during the telecast, Lowry waited for close to 10 minutes for a ruling only to play from the original spot en route to bogeying the hole.

Running hot, the Irishman went on to bogey the 17th to fall out of the top 10.

"I think the referee didn’t have the balls to make a decision there, and if he did I would have had an easier shot," Lowry told the Irish Times this week.

"If you put (European Tour official) John Paramor or any of the good referees out there, and he would have given me full relief. But he wasn’t giving me full relief, he was telling me to drop it in a tree basically.

"The camera tower was the issue. I took my drop there was another camera tower in my way, straight away I felt I should get dropped on other side and they were getting me to drop it in the middle of the tree. I can’t, so where do I drop it? They’re saying drop it here, I have a club length (to drop the ball) and it is still my way. He wouldn’t make a decision.

"Then the other referee said, ‘it is your decision’. I said, ‘Do you know what? I’m just going to play’. I didn’t want to wait around any longer."

In case you missed it during Sunday's broadcast, here's a look at the shot Lowry eventually played.