SHOCKING FIGHT breaks out on the golf course over the weekend

Slow play rears its ugly head again on the golf course, and things quickly get out of hand... 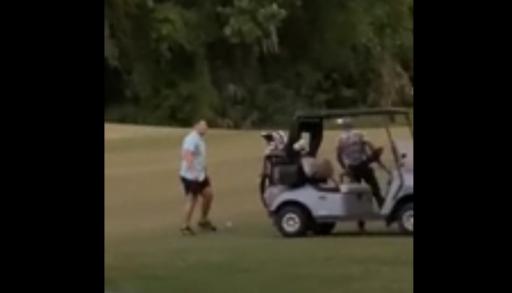 A video has gone viral this week of a shocking fight on the golf course in the United States from over the weekend.

Judging by the comments in the thread on social media, it was all down to... yes you guessed it, slow play.

So here is the backstory, according to the original video poster who goes by the name of McSqueezyE on Reddit:

"Backstory here: paired up with this 2-some. They were like 50ish. Super cool dudes. We get to 18 and these bros have been playing slow all day, so one of the randoms we paired up with (5’3 110lbs Vietnamese guy named Phat) yells ‘hurry the f*** up.’ These 20 year old kids get pissed and one takes the cart to meet Phat in middle of the fairway and they start fighting” lmaooo."

"I'll give you the whole backstory as I was in the group. The kids in front were hacking it around pretty bad on 17 and 18 and barely made it past the ladies tees on their tee shots. Hit another one in the woods on the next shot, and then drops another and hits it again. Its already 7:55 PM and its us on the tee box and another two trying to finish their round before dark.

"They finally hit and start driving up towards the green and Phat stripes one right on their ass so they are annoyed already. Then they get near the green and are hitting multiple shots and just playing around. Its now about 8 and we can barely see. Phat yells at them without swearing to hurry up we want to finish here.

"The guys start yelling obscene stuff, especially the guy in the blue who says "come over here I'll beat your fucking ass you cocksucker" and calls him a F** and stuff from the green. No one else really says anything and then the guy in the blue gets in his cart and drives down the fairway.

"Phat drives to meet him and then the guy is violently shaking Phat's cart and then swings at Phat and hits him in the leg and thats when he gets him pretty good and then his friends come running and thats when I thought it was going to get bad but they apologize for their friend who is extremely drunk."