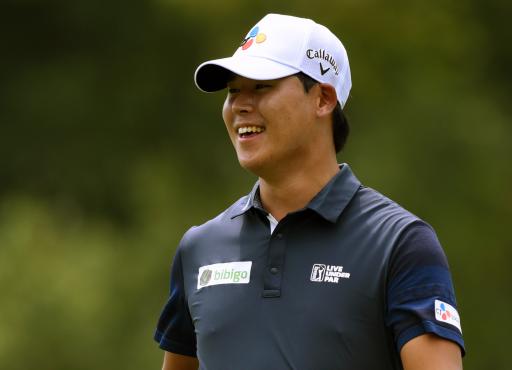 Si Woo Kim posted a stunning third-round 62 - highlighted by a hole-in-one at the par-3 3rd - to race into a two-stroke lead heading into the final round of the Wyndham Championship.

Kim, who won the first of his two career PGA Tour titles at the 2016 Wyndham Championship, carded an eagle, seven birdies and a bogey to reach 18-under par and move two strokes clear of Doc Redman (63) and Rob Oppenheim, who matched Kim's 8-under 62.

Watch Kim's stunning hole-in-one in the video below. His reaction was pretty subdued to say the least...

Si Woo Kim got his third round started in a BIG way.

Incredibly, Kim nearly made a second hole-in-one in his round at the par-3 12th when his ball brutally lipped out for an ace!

The South Korean showed a bit more emotion this time around, throwing his hands in the air in disbelief with a grin.

Watch the shot below...

He couldn’t get any closer to a second ... #QuickHits pic.twitter.com/VuTkQ1RsY8

Billy Horschel lies three strokes off the pace in solo fourth on 15-under par following a round of 65, with Mark Hubbard (64) and Jim Herman, who shot a low-round-of-the-week 61, back on 14-under par.

Joint tournament favourite Webb Simpson is on 13-under par after a round of 65 alongside Peter Malnati, who went round in 64.