Golf fans left confused as Mickelson whips out a driver on the putting green at the Workday Charity Open... 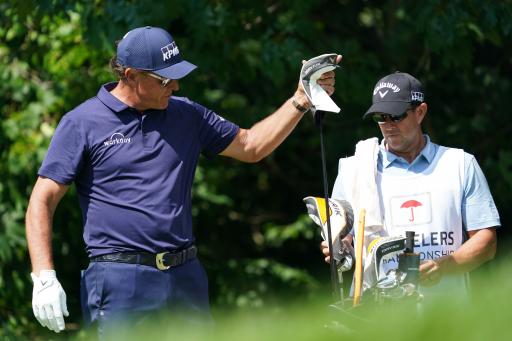 Golfers will try anything they can to trim shots off their scores, especially one of the biggest tinkerers of them all in Phil Mickelson.

That was clear for all to see on day one of the PGA Tour's Workday Charity Open as Lefty got to his first green of the day and then whipped out his driver to work on his putting stroke. Watch the video below to see what he was doing...

Using the driver every chance he gets. pic.twitter.com/CrKVKbvUXb

After watching Mickelson stick his driver between his arms to practice his putting stroke, a flurry of golf fans raced onto Twitter to question whether it was a legal move.

We can assure those of you questioning Mickelson's motives here that it's all within the rules of golf, as confirmed by GolfMagic's resident PGA Rules Panel Member, Ashley Weller.

"It's equipment not a training aid so Phil can do it as long as not for a stroke," Weller told GolfMagic. "It's like swinging two clubs to loosen up."

Weller also revealed the exact point of it: "Getting his shoulders rocking square to the line you can see from the driver shaft if you're opening shoulders through the strike."

Mickelson started brightly on day one by going out in 32 strokes, but then stumbled badly coming home in 41 strokes to open with a 1-over par 73.

Here's a look at some tweets from a number of confused golf fans...

That’s not a penalty for using a training aid?

Well it didn’t work his putting was not good today

Is that a rules infraction? I’m glad they don’t allow fans to call in rules infractions but didn’t a player years ago get busted for putting his glove under his left arm for practice swings during a round?

Maybe he should just putt with the driver.

Is he trying to just make everyone wonder if this is illegal? Cuz thats what hes actually doing...