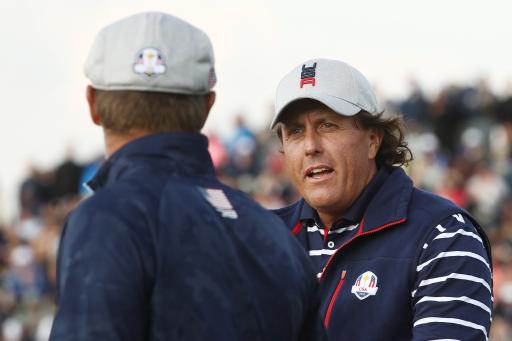 Phil Mickelson ranked 192nd in driving accuracy on the PGA Tour this season. There were 193 players in the list.

That didn't prevent United States captain Jim Furyk from sticking the experienced Lefty out with Bryson DeChambeau in the alternate-shot foursomes format on Friday afternoon at Le Golf National.

United States lead 3-1 following their impressive display in the morning fourballs, but Europe responded emphatically with their first ever 4-0 whitewash in Ryder Cup foursomes history to take a 5-3 lead into the weekend.

But many fans, mostly Americans, have raced onto Twitter to express their frustration at seeing Mickelson out in the foursomes, and not in the fourballs. Or even playing at all, given his current form.

Even Butch Harmon in the Sky Sports Ryder Cup studio admitted during the live coverage: "Yeah, Phil is not even playing well in practice at the moment."

Mickelson and DeChambeau both played a number of poor shots in the afternoon, one of which saw Mickelson send an iron off the tee on a par-5 into the water...

Iron off the tee on a par 5 into the drink. Is that Phil Mickelson or Tursky? #rydercup #golf #lefty

Check out some of the best tweets...

What the PHIL?! Iron layup off the tee on a par 5 and it's in the water... #RyderCup #GoUSA pic.twitter.com/JVdOiMcCcR

PHIL JUST LAYED UP OFF THE TEE WITH AN IRON ..... ON A PAR 5..... INTO THE WATER #RyderCup pic.twitter.com/LwHbvUbmDa

What the hell was he thinking not pairing Speith & Reed? And then you throw out Mickelson & Bryson D. Terrible job on his part.

McGinley is a gobshite. US had a very bad session this afternoon, but it’s wishful thinking on his part to suggest they’re in crisis. Woods and Mickelson did what they always do, brought the rest down. Leave them out till the singles, the team’ll be better tomorrow.

Mickelson to DeChambeau: “We have to turn this match around.”
DeChambeau to Mickelson: “Momentum is mass times velocity, or p=mv or (kg•m/s)
per Newton’s Second Law of Motion.”

How Mickelson is even at the Cup and PLAYING baffles me. This is going to be an epic USA ass kicking. Not even Woods or Reed can save us.

I like Furyk but pairing Mickelson and DeChambeau together is out thinking yourself. Neither one showed any form last week. Damnit!

Mickelson is in the wrong format. He needs to play Fourball where he plays his own ball. Alternate shot is brutal because he's putting Dechambeau in bad spots. Agree totally though on birdies on match play.