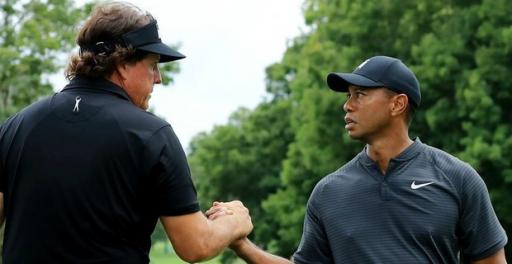 Tiger Woods and Phil Mickelson have only just announced their $9 million box office clash in Las Vegas on November 23, and they've wasted little time in exchanging some blows.

Although Mickelson said on Wednesday he would refrain from trash talking until after he and Woods presumably get wildcard picks and compete together as members of the US Ryder Cup team next month, he tweeted a couple jabs at Tiger on Wednesday and told the media it would be "the easiest $9 million" he's ever made.

Mickelson joined Twitter earlier this week, and here's what he posted, of course taking the mick out of the poster like many of us have done so already:

@TigerWoods I see you have a left-handed driver, well played. I hope it's a Callaway pic.twitter.com/qWuXsGVC6z

Woods did not fire as many shots in his opponent's direction, but what he did say probably put him 1 up.

"I think I'm minus 180 right now," Woods chirped, referring to his current Vegas odds, which make him a solid favorite.

NEXT PAGE: WOODS SAYS PGA TOUR POY IS ALREADY OVER!