Golf News: Woods may have had 20 aces in his life, but he's only made three in his PGA Tour career! 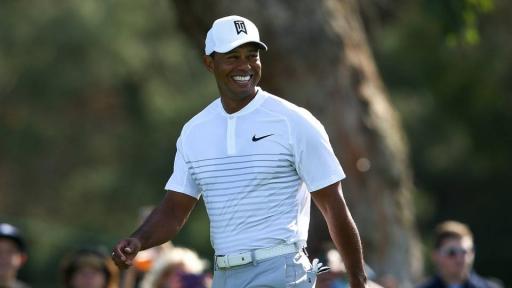 Tiger Woods has revealed how he made his first hole-in-one in 20 years when playing alongside his son Charlie and Fred Couples just two days before losing to Phil Mickelson in 'The Match' last week.

Woods, 42, speaking ahead of hosting this week's 18-man Hero World Challenge, explained how he aced the 210-yard, par-3 second hole at Madison Club (La Quinta, Calif.) with a 5-iron.

The 14-time major champion said he was unable to see the ball go down, but that it was the 20th hole-in-one of his life - only 20 years after his 19th!

WATCH: TIGER WOODS GIVEN LADY'S PHONE NUMBER DURING 'THE MATCH'!

Incredibly, Woods has made just three aces in competition mode on the PGA Tour, with his last coming in 1998 at Castle Pines in the old International tournament.

He also made one in his pro debut at the Greater Milwaukee Open in 1996, and then quite possibly the most famous hole-in-one of all time when  holing out at TPC Scottsdale's famous par-3 16th the following year...

WATCH: FAN SHOUTS HE'S OFF TO A VEGAS STRIP CLUB, TIGER LOVES IT!

Tiger Woods
hole in one
ace
Fred Couples
PGA tour
Phoenix Open
TPC Scottsdale
stadium hole
tiger woods career hole in ones
Previous
Only 11% of golf fans can name the winners of these big events in 2018
Next
Tiger Woods reveals what went wrong in his match vs Phil Mickelson...