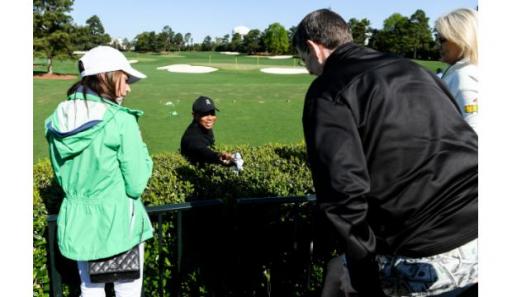 Tiger Woods made a cancer patient's dream come true at the Masters last week when meeting him in person at Augusta National.

Shane Caldwell has beaten colon cancer twice and is now stricken with Stage 4 lung cancer, but that has not prevented him from supporting his lifelong hero Woods.

Caldwell's stepdaughter Jordan Miller wanted to make his dream become reality and so posted a tweet asking if Woods would connect with him at golf's greatest event.

According to Miller, the tweet, which reached over 10,000 retweets, caught the eye of Woods' girlfriend Erica Herman.

“By the end I think they were hearing about it from multiple different angles, but it was Erica that made it really happen," said Miller.

“Her and Tiger both lost their fathers to cancer. So they probably understand a little more than most what it’s like to go through that.”

PLEASE RETWEET!! I need help making my step dads dream of meeting @TigerWoods come true. He has stage 4 lung cancer and is very sick. This would mean the absolute world to him. Please help me make this happen for him pic.twitter.com/m7xRCi5NKr— Jordan Miller (@jordsierra27) April 1, 2018

Caldwell and his family were able to score tickets to the Masters, and met with Woods long enough to get a signed glove before he teed off in the first round.

"It was quite a thrill," said Caldwell as he showed off his signed glove. "It was really a great experience. Pretty emotional."

Thanks for that smile @TigerWoods pic.twitter.com/zUx92ytDwa— Jordan Miller (@jordsierra27) April 9, 2018