How much do you think the big cat is worth? 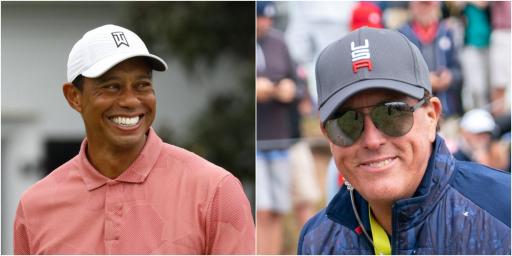 If you somehow manage to make it in the game of golf then you have the opportunity to make millions.

There is just so much money in the game and we fetishize it to an extent we're always trying to find out prize purses once a player has collected a big win.

In a quickfire question and answer session the other night when Instagram, Facebook and WhatsApp went down, one PGA Tour made an admission.

Byeong Hun An suggested he thinks most professionals are checking out the prize purses every Sunday.

Why wouldn't you, especially if a putt could be worth the difference between hundreds of thousands of dollars?

That being said, who are currently the richest players or ex-players involved in the game of golf? No prizes for guessing who is top.

Singh's estimated net worth comes from his 34 victories on the PGA Tour, including a Masters title and two PGA Championships. He owns a vast amount of real estate and has several brand deals. He currently plays on PGA Tour Champions.

Els has won 19 times on the PGA Tour, 28 on the European Tour and four major championships. The big easy owns property at Wentworth Club amongst other properties, is involved in running a course design business and a winery.

Spieth is one of the highest paid athletes in the world. At this stage in his career he has earned more than $40 million from PGA winnings alone. Such is his popularity he has several endorsement deals. He reportedly owns a 5-bedroom home with an indoor basketball court, gym and a golf simulator. He is said to have paid $7.15 million for the home.

Couples has amassed 64 tournament wins across the PGA Tour and PGA Tour Champions, including his memorable 1992 Masters win. He's into designing courses and buying and selling art. Couples also has an endorsement deal with Antabloc, an anti-inflammatory tablet and was involved in golf video games.

What can you say about Rory? Loved on both sides of the pond and his popularity seems never-ending. He has spent more than 100 weeks ranked as the world's best golfer and has won four majors. By age 22, McIlroy had become the youngest player to reach €10 million in earnings. His eye-watering deal was originally worth $100 million in 2017, but it has since been extended to reportedly being worth more than $200 million. Because Nike stopped making golf equipment, it allowed McIlroy to sing with TaylorMade to use their golf clubs in a deal worth $100 million. McIlroy has won the FedEx Cup twice, once in 2016 for $10 million then again in 2019 for $15 million.

The greatest player to ever come out of South Africa. Nine major championships to go alongside his 150 professional victories. As of 2021, Forbes estimates his net worth to be $250 million.

The great white shark was reportedly the first golfer in history to reach more than $10 million in career earnings. Norman is heavily involved in property investments and owned an 11,600-acre ranch in Colorado. He listed the property for sale at $55 million but couldn't find a buyer. It has since been sold for an undisclosed sum. His company, founded in 1993, is involved in the design of golf courses, wineries, private equity, eyewear, clothing, food and restaurants.

The Golden Bear has won 18 major championships and 73 times on the PGA Tour. Only Tiger Woods, Michael Jordan and Arnold Palmer have made more money in their careers. He is the founder of Nicklaus Design and has cast his gaze over more than 380 golf courses in 36 countries. He also has several endorsement deals with Perry Ellis and Rolex. Nicklaus is said to have given always hundreds of millions of dollars to charity.

Mickelson is only second to Tiger Woods in career earnings from PGA Tour events. He's won six major championships and has several big-money endorsement deals. As of writing, Mickelson has earned $90 million in tournament prizes. His biggest brand deals are with KPMG, Callaway Golf and Rolex.

Of course it would be the big cat. Woods reportedly earns around $50-60 million a year. Since turning professional in 1996, his career earnings top $1.5 billion. His networth comprises from tournament wins and endorsement deals. He has deals with Nike, Gatorade, American Express, Asahi General Mills, Golf Digest, Rolex, NetJets, TaylorMade and Buick. He owns a yacht, a private jet and a 12-acre ocean-front property in Jupiter, Florida.

RELATED: THE ODDS OF CHARLIE WOODS TO WIN A MAJOR BEFORE AGE 25