"That's why he's the GOAT": Bryson DeChambeau on first meeting with Tiger Woods

Despite competing in major championships and Ryder Cups, Bryson DeChambeau admitted that he had never been so nervous as when he met Tiger Woods for the first time. 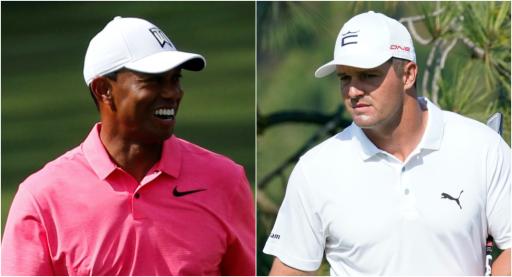 Bryson DeChambeau admitted meeting Tiger Woods for the first time was the most nervous he has ever been on a golf course.

Although he has been on the PGA Tour since 2017, he is already a US Open champion and an eight-time PGA Tour winner and there is much more to come from DeChambeau.

However, in 2018, he met Woods for the first time at Torrey Pines. It was an awkward encounter that the 28-year-old is not likely to forget in a hurry.

Speaking on the Full Send Podcast, DeChambeau discussed the Ryder Cup, his relationship with Brooks Koepka, Long Drive and of course, his first time spent with "the GOAT."

"He's been great. The first time I met him in 2018, this is hilarious. This was the most nervous I've ever been on a golf course," DeChambeau said.

"Number 10, Torrey Pines. That's where I played with him for the first time, that's where he asked me to play, I said 'yeah let's do it'. We got out there and the media was everywhere, and Tiger was as stoic as ever.

"I shook his hand and there was nothing, he would just look at you. Walk right past you as if you were nothing. And that was when I first met him. That's how amazing it was."

Despite the lack of dialogue between the pair, DeChambeau sounded almost honoured to be blanked by the 15-time major champion and 82-time PGA Tour winner.

It was also in 2018 when DeChambeau and Woods were paired together at the Ryder Cup in France. This was not a memorable week for DeChambeau who lost his match with Woods and he also lost when he was paired with Phil Mickelson.

But during their first encounter, DeChambeau's curiosity and scientific brain got the better of him. He quizzed the 45-year-old on his putting which turned out to be music to Woods' ears.

"For the first two or three holes, there was not much that he said. And then finally on 12, I asked him about something on his putting, because I'm a geek when it comes to putting - and he's a nerd as well," DeChambeau added.

"Complete nerd and I love it. I started talking about putting and he goes down the rabbit hole, it was as deep as you can go with putting. We connected super well.

"His entire life, he has controlled crowds by his motion to be respectful of other players. People don't understand how much of a mental toll that actually is. When do I move? How do I move?"

"That's what happens when you're the greatest of all time."

There has previously been footage of the pair discussing this part of their short game on practice greens at PGA Tour events. How good would it be to hear just a couple of words from these exchanges?

It was a pleasure to hear DeChambeau talk about his relationship with such a sporting icon and give an insight into walking the fairways with him.