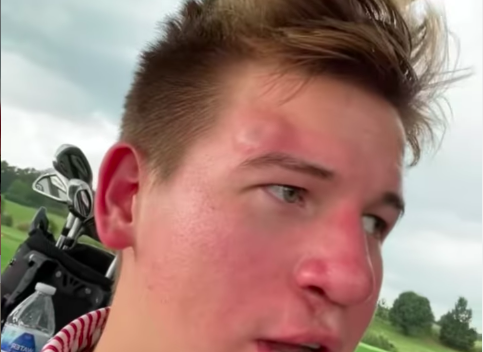 Accidentally hitting someone with your golf ball is something that every single player dreads and it can happen to anyone on any occasion.

Players are often criticised for not shouting 'FORE' on the PGA Tour when their ball is flying towards a crowd of people and this is because it is so important to people's safety.

If you think your ball could potentially hit someone on another hole, you should shout 'FORE' so that they can protect themselves as soon as possible.

But sometimes, even if you are fully protected by your golf bag or even a golf buggy, you are not always going to avoid being hit by a golf ball.

Unfortunately for one golfer, he discovered this the hard and painful way. A video emerged on social media of a golfer who had been hit with a golf ball while sitting in his golf buggy.

The ball had shattered the protective screen at the front of the buggy and landed on the top of his head, leaving him with a nasty bump.

Credit to the unlucky golfer, he showed us the aftermath of the accident and made light of it by saying, "Thank god nobody got hurt, that could have been really bad."

"Hope the noodle is still good," one fan said.

"Karma for drinking glass on the course!" one fan commented.

"Crazy how he was hit in the forehead and nose," another fan said.

"Those aren’t meant for protecting your head!!! It’s a windshield! It even says it on the cart," one fan said.