World Long Drive champion Kyle Berkshire has been helping Bryson DeChambeau with his speed training and you can see why... 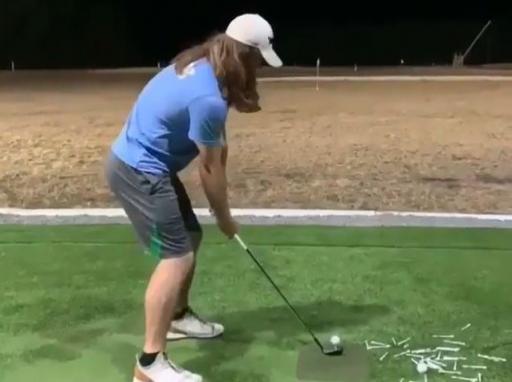 Kyle Berkshire had golf fans talking on Instagram after the World Long Drive champion posted a video where he hit his lob wedge a massive 260 yards.

"Here’s a video of me hitting it as far as I can with a lob wedge! Ended up going a bit north of 260 yards with 115 mph club speed and 158 mph ball speed (trackman numbers at end of video)," read the caption under Berkshire's original post on his Instagram page (@kyleberkshire).

WATCH BERKSHIRE'S MONSTER LOB WEDGE SHOT IN THE VIDEO BELOW:

Not all golf fans were impressed with Berkshire's video though, with one man accusing him of 'blading' the shot.

"I mean, it's bladed dude. I don't give a sh*t about your trackman numbers. Hit it on the sweet spot and then show your numbers," read the comment on Berkshire's post.

Berkshire has recently been working closely with Bryson DeChambeau as the reigning US Open champion looks to increase his ball speed on the PGA Tour, with an average of between 205 - 210mph the target for the 27-year-old.

RELATED: Video goes viral of a man attacked by a KANGAROO on a golf course!

Speaking about his relationship with Berkshire prior to the Sentry Tournament of Champions earlier this month, DeChambeau said: "He [Berkshire] was a 117, 118 mile-per-hour golf swing in college and he has gone all the way up to 150 now. He's obviously done the right things and he's done it completely naturally and without anything and I wanted to learn from him.

"I took it upon myself to ask him some questions and we spent a few days together and we've been talking back and forth. He's been giving me tips on what to do and how to keep the speed out here on Tour."