WATCH: Boris Johnson's golf swing could do with A LOT of work!

Boris Johnson is said to have had a birthday party indoors during the 2020 lockdown. It's fair to say his golf swing could do with some work after his last encounter with Rory McIlroy. 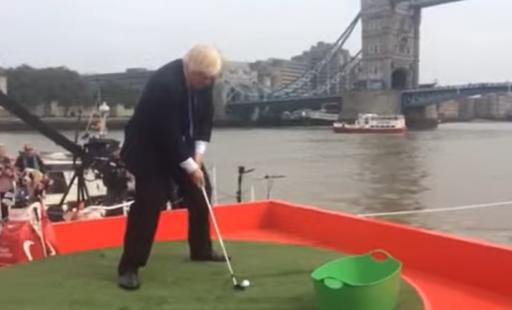 Boris Johnson is said to have gone against social distancing rules by having a birthday party indoors with up to 30 people during the first national lockdown in 2020, according to ITV News.

Johnson's wife, Carrie, allegedly helped organise the surprise party for her husband on the afternoon of June 19 - a time when all of us were restricted to do just about everything other than work from home (if we could), pop to the shops for groceries, meet outside in a group of six and somehow attempt to break 90.

I mean, come on Boris. You can't have your birthday cake and eat it.

Oh yeah, before we rant some more about Boris, here's a lookalike attempting a Happy Gilmore swing:

Golf courses reopened in England on May 13 having initially closed when the lockdown restrictions first came into place at the end of March.

Taking a closer look at the golf swing of Johnson - who once hit balls during an event with Rory McIlroy - and it's fair to say if the PM did fancy some downtime on June 19 then he would have better set adhering to his own guidelines and spending time outside on the fairways trying to improve his game.

And certainly not mingling with his pals and peers while munching on picnic food indoors, at least according to ITV.

Apparently Johnson was only at his party for 10 minutes, but most of us would agree that is 10 minutes too many.

Let's not forget June 19 fell at a time when police were patrolling the streets and handing out fines to just about anyone who had been gathering indoors during the first lockdown due to the Covid pandemic.

On the evening of the same day, Johnson's family and friends are said to have been hosted upstairs in the PM's residence in a further breach of the rules.

That has since been denied by Downing Street, but ITV believes otherwise.

It marks a string of recent controversies for the PM, who many believe is now on borrowed time.

Let's just say, a bit like his running of the country right now, it could do with some work.