The clubhouse at Oakland Hills, former venue of the US Open, US PGA and Ryder Cup, has caught fire and most of it will be lost. 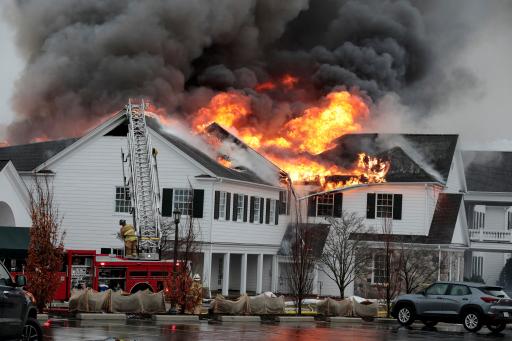 The historic clubhouse at Oakland Hills, former venue of the US Open, US PGA and Ryder Cup, has caught fire and early reports indicate that most of it will be lost.

The shocking incident happened at around 10am on Thursday morning with the clubhouse going up in flames with black smoke.

It is understood the fire broke out in the attic of the clubhouse, which was completed back in 1922.

MORE: AUGUSTA NATIONAL WILL BE RECORD LENGTH FOR THE 2022 MASTERS

The clubhouse is now likely to be lost in the fire as the fire as destroyed the central part of the building.

All the clubhouse memorabilia is understaod to be unrecoverable.

No injuries have yet been reported and the cause of the fire is so far unknown.

Images from the current fire at Oakland Hills CC are chilling. Building dates back to 1922. Awful.

Video submitted from an individual on the ground: pic.twitter.com/UdiP8G0D7i

BREAKING: Fire services are combatting a fire at Oakland Hills Country Club in Michigan, which has staged over in a dozen major championships. pic.twitter.com/Oaw1DQSj6f

The Bloomfield Township fire chief has given an update on the ongoing battle against the fire at Oakland Hills Country Club, as well as the current damage pic.twitter.com/s2ejVD9QzQ

Oakland Hills has played host to six US Opens down the years, as well as three US PGA Championships and the 2004 Ryder Cup, which was won by Team Europe 18.5-9.5.

It has also hosted two US Amateurs and two US Senior Opens.

Padraig Harrington won the 2008 US PGA Championship there.

Oakland Hills is a private golf club in the United States, located in Bloomfirled Township, Michigan, a surburb north west of Detroit.

It consists of two 18-hole courses designed by Donald Ross.

NEXT PAGE: PHIL MICKELSON: SAUDIS ARE "SCARY MOTHERF***ERS, WE KNOW THEY KILLED JAMAL"