Phil Mickelson is no stranger to taking on crazy shots at charity days and even during PGA Tour events. 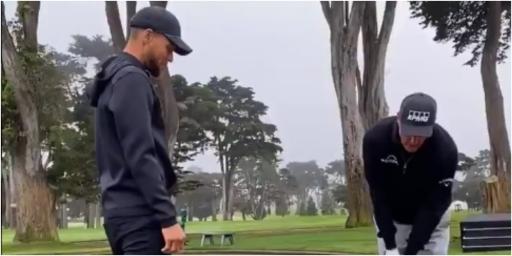 Phil Mickelson has played some insane shots in his stellar career, there is no doubt about that.

From hitting a flop shot in tight with his back to the pin to carving one over and around trees at Augusta National - we've seen it all.

But the man who hits high bombs and hellacious seeds may have just topped the lot with his latest trick shot.

A video posted by Callaway showed the three-time Masters champion gearing up to hit a flop shot over NBA star Steph Curry.

Curry looks visibly nervous as Lefty says: "So you're a little taller than my normal test subjects... don't crouch down.

"I'm just gonna drive the club into the ground and hope for the best."

RELATED: HOW MUCH DID EACH PLAYER WIN AT THE BMW PGA?

Of course, he pulls it off, launching the ball high into the air and over the 6ft 3ins basketball player.

Curry audibly screamed and admitted he was a little bit nervous before Mickelson hit the shot.

Curry plays as a point guard for the Golden State Warriors.

He is a three-time NBA champion and collected the Most Valuable Player award in 2015 and 2016.

There is no doubt Warriors fans breathed a collective sigh of relief when Lefty pulled off another trick shot.

The day he accidentally clips a subject may be the day he needs to retire.

Let's hope it's not for a long time yet, Phil.

NEXT PAGE: WHY IS IT A DISGRACE HARRINGTON LEFT OUT ROSE