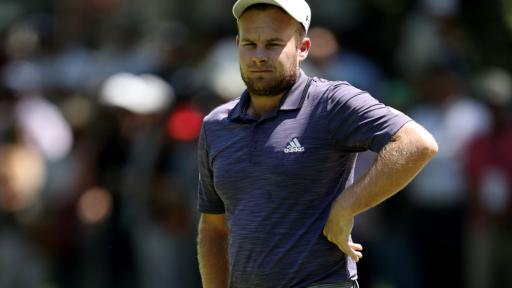 Tyrrell Hatton's reaction to his approach shot into the 18th hole said it all during round three at the Dell Technologies Championship.

Laying up into the drop zone for his third shot into the par-5 last, Hatton took dead aim at the pin only to see his ball take a sneak peek on the edge of the cup before zipping back to five feet. Watch the shot below...

Could not be any closer to going in ...@TyrrellHatton's reaction is perfect. #QuickHits pic.twitter.com/cIbTzdAyn4

Thankfully Hatton would hole the putt for birdie and progress to 12-under par to sit one stroke shy of 54-hole leader Abraham Ancer.

Bryson DeChambeau joins Hatton on 12-under par and is bidding to win consecutive tournaments in the FedEx Cup Playoffs.

Hatton's compatriot Justin Rose sits a further stroke back on 11-under with in-form Australian Cameron Smith.

Rory McIlroy heads into the final round four strokes off the pace.