WATCH: Viktor Hovland's STOP-START backswing is all the rage...

What do you make of  Viktor Hovland's new backswing technique to create more power? Watch this... 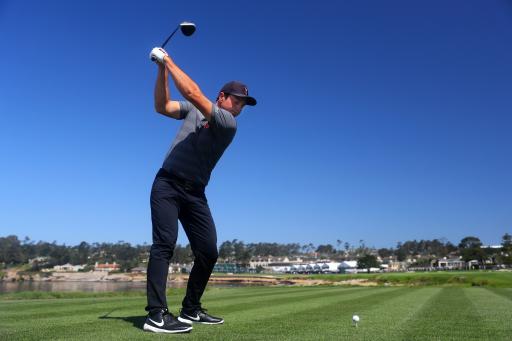 Viktor Hovland was spotted with an eye-catching STOP-START backswing during his professional debut at the Travelers Championship last week - and it clearly worked as he ranked first in strokes-gained tee to green for the week!

As you can see from the video clip below, Hovland winds to the top of his backswing, pauses, then presses play on his backswing by turning and then swinging through to impact.

According to the 21-year-old Norweigian star, by pausing where he does at the top of the backswing, he puts himself in a better position where he can feel a draw.

Hovland - who finished tied 12th at the US Open two weeks ago - ranked eighth in driving accuracy and first in strokes-gained tee to green at the Travelers Championship en route to a tie for 54th in his pro debut.

Check it out below and let us know what you think of his swing on our social media channels...

Viktor Hovland reaching back for a little more power ... pic.twitter.com/3DfWsCYfF0