Simpson drains five birdies in six holes on the back nine to capture his seventh career PGA Tour title. 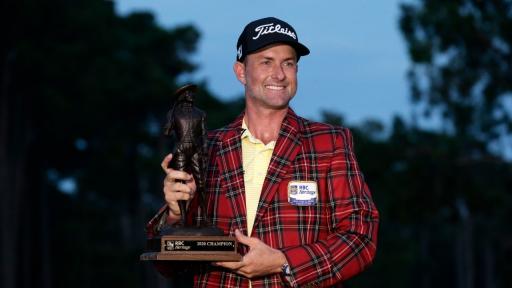 Webb Simpson's putter lit up on the back nine in the final round of the RBC Heritage as the American rolled home five birdies in six holes from the 12th to capture the RBC Heritage at Harbour Town Golf Links, Hilton Head, South Carolina.

Simpson, 34, carded a final-round 64 to finish one stroke clear of Mexico's Abraham Ancer on 22-under par.

Second win of the season for @WebbSimpson1!

A victory @RBC_Heritage moves him to No. 1 in the #FedExCup standings. pic.twitter.com/kWnHI1BgRN

The victory vaults Simpson up to a career-high fifth in the Official World Golf Rankings and to the top of the FedEx Cup standings.

Simpson's putter lit up on Friday with more than 100-feet of holed putts, but then went very cold on Saturday and for most of the front nine on Sunday.

RELATED: HOW MUCH EVERY GOLFER WON AT RBC HERITAGE

That all changed at the 12th when Simpson holed from 10 feet, before he joined the lead from 22 feet at the 13th. He then two-putted for birdie at the par-5 15th having been one of only a handful of players to find the green in two on the final day.

He then nosed ahead by one stroke when draining a 15 footer at the short par-4 16th, and then sealed the deal with another birdie from 17 feet at the tricky par-3 17th.

CLUTCH!@WebbSimpson1 birdies the 71st hole to take a 2-shot lead.

He's birdied 5 of the past 6 holes. #QuickHits pic.twitter.com/E2s51MOXwq

"It was a crazy day, honestly, I’m speechless right now," said Simpson, moments after clinching his seventh PGA Tour title on a final day where there was a two-hour delay due to inclement weather.

"We had that big delay, I texted my good friend to see if I could stay at his house here tonight. It looked like we weren’t going to finish, but we went back out, the Tour did a great job getting us out there pretty quickly, only had a 20 minute warmup.

"It was a long day on the golf course as well, I didn’t really get it going until 12, and then the putts started going in, and I was getting confident, and it’s amazing to be standing here right now."

Tyrrell Hatton had looked on the verge of landing consecutive PGA Tour victories when racing one-stroke ahead of Ancer on the front nine, but despite an incredible display of putting from the Englishman, he was forced to settle for a tie for third on 20-under par alongside the previous week's Charles Schwab Challenge winner Daniel Berger.

Sergio Garcia looked more like his old self with a final-round 65 to finish in tied fifth on 19-under par with Chile's rising star Joaquin Niemann.

The shot of the final day came from Brooks Koepka, who sent his tee shot into three feet for eagle on the par-4 9th...

Before play was suspended, @BKoepka was playing par 4s like par 3s.

Koepka finished with a round of 65 to finish seventh - his best result since finishing fourth at the Tour Championship last August.

WEBB SIMPSON: WHAT'S IN THE BAG