Woman leads police on a wild car chase up and down the fairways at Florida golf course. 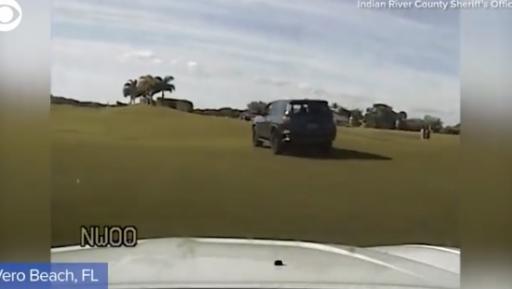 A wild police car chase broke out on a Florida golf course on Tuesday afternoon. The incident is said to have happened at Grand Harbor Golf Course in Vero Beach at around 1pm.

According to the Indian River Country Sheriff's Office, police deputies attempted to pull over a 60-year-old woman named Jodi Harvey in a nearby community, but she would not stop.

Dashcam footage then shows how the woman plowed her SUV through a gate at Grand Harbor GC, leading police on a chase up and down the fairways.

Golfers can be seen running out of the way of the chase as the SUV and police cars dodged in and out of golf carts.

Unfortunately this wild police chase led to visible markings on the fairways - no doubt much to the delight of the greenkeeping team.

WATCH THE DASHCAM FOOTAGE BELOW

US: Woman leads police chase through golf course:A woman led police on a car chase through a golf course in Vero Beach, Florida on Tuesday (12/7). The Indian River County Sheriff's Office said the woman refused to stop when an officer attempted to pull her over, and she plowed pic.twitter.com/04Wa1AL8rV

As you can see from the video above, the police performed a PIT maneuver to make the SUV come to a halt in the middle of a fairway.

The lady was then taken into custody and she is now being held in county jail with no bond.

Thankfully nobody was injured in the police chase, although two police vehicles had sustained damage, according to the Indian River Country Sheriff's Office.

NEXT PAGE: FIRE BREAKS OUT AT THE BELFRY HOTEL RESORT RYDER CUP VENUE