The WILDEST golf course in the world 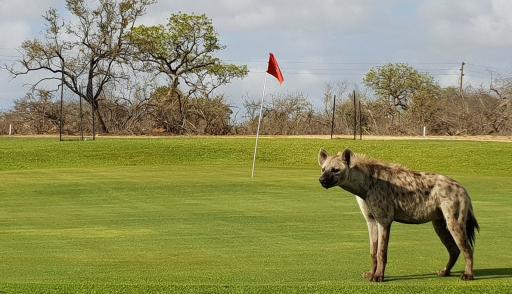 In the UK you might see a deer or two running across the course. In Florida, you might stumble across an aligator. At the Skukuza Golf Course in South Africa, you'll likely see some of the most wild animals on the planet strolling across the fairway, including lions.

Skukuza local and green keeper of the course, Jean Rossouw, has the daily duty of inspecting the nine hole course every morning to see what sort of damage has been caused by animals like elephants, lions and hyenas.

On Monday, Rossouw, 29, came across eight lions on the golf course during his morning routine and he was forced to chase them off of the golf course.

The wide graassland areas on the golf course attract a full range of animals that you'd expect to see on an African safari, including leopards, giraffes, hyenas, elephants, lions, warthogs and more.

"I would go as far to say Skukuza is the wildest golf course in the whole world," said Rossouw.

"My job as green keeper is to drive around in the early mornings to see what's on the golf course.

"I'm on the course all day and I'm driving up and down to make sure there's no dangerous animals near the people, so it's fairly safe.

"I found lions on the course this morning around 6.30am and chased them off with the vehicle. If you come across them you do get a bit of a fright, but they also get a fright.

"I turned around and got a vehicle to drive in because you don't want to face them head to head with a golf cart.

"I also checked what the elephants damaged the night before because they knock down the trees.

Mr Rossouw has worked at Skukuza Golf Course for five years and believes that there is no other golf course in the world with the same number of dangerous animals.

"We've also got the whole Big Five and other animals on the course - lions, leopards, hyenas, elephants.

"I think the weirdest thing is we live amongst them. It's a great feature of them being around.

"It's incredible seeing them at any time of day.

"It's quite nice having them around here and is part of what makes the course unique."

Check out some of the video of the golf course below: