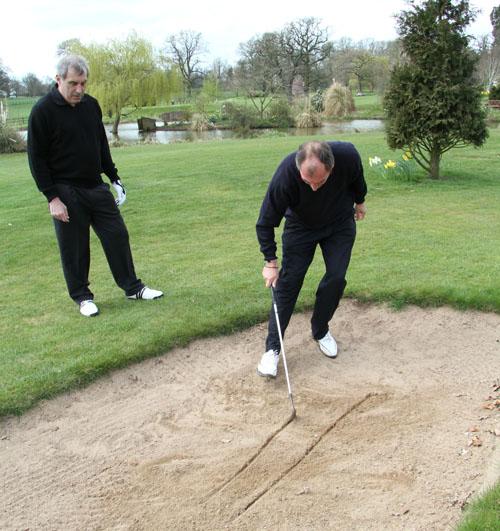 As England's most capped footballer former Leicester, Stoke and Nottingham Forest goalkeeper Peter Shilton is a legend. But he admits he still has much to learn when it comes to golf. We offered him the chance of a series of lessons with former Welsh World Cup golfer Mark Mouland at the Nailcote Hall near Coventry which stages the Farmfoods British Par-3 Championship from August 10-13, when Peter will also be playing the pro-am.

Says Mark Mouland: "Like any bunker shot there's a technique that needs to be understood first before a player can consistently get the ball out.

"I teach all my academy students the same way so that they are aware of the clubhead and what it needs to do."

The club: Sand iron with at least 54-58 degrees of loft and enough bounce in the sole (10-14 degrees) to splash into the sand and lift the ball gently out on the cushion of sand it helps to create.

The execution: "In the practice bunker I draw two parallel lines, one for the entry to the sand, the other for the exit. They are about six inches apart. Without a ball my students learn the correct entry and exit of the clubhead before I put a ball in place.

Shilton says: "Mark's practice routine helped me understand how the club enters and exits the sand. I'm effectively trying to hit the sand in the right place with the sole of the club and the ball will look after itself."