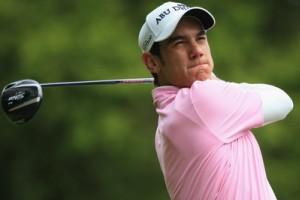 Although the 20-year-old Italian struggles to mix it off the tee with the big boys, ranking a lowly 197th in the driving distance chart on the European Tour this year, the story was entirely different at the BMW PGA as Manassero ranked 66th in distance for the week.

Fuelled with a brand new Titleist 913D2 driver and having spent the last few months in the gym - he’s added seven pounds of muscle - on top of honing a new swing, Manassero is now proving he's force to reckoned with in world golf.

From these series of snaps you can see Manassero is using his increased strength to good effect by delivering his weight into the ball.

In order to generate more power, the Italian phenom coils his body by restricting his hips while the shoulders turn back. He then shifts weight towards his left side and then lets the lower body lead an aggressive rotation toward the target.

This causes the club to lag behind, so he has to quickly rotate his hands, wrists and forearms counter-clockwise to square the club at impact.

At set up, Manassero looks extremely comfortable and poised. His upper body is nicely out over the ball and his arms hang loosely away from his body. It’s a very athletic-looking address position, as expected for someone so young.

Another interesting aspect is his takeaway. Manassero ensures the club tracks up the plane as the hips, chest, butt of the club and arms move as one. There is no whip or flicking with the hands, just one simple turn away with the core of his body.