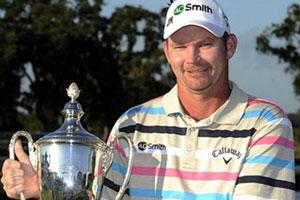 If you have a slightly unconventional swing, you’re not alone.

Tommy ‘Two Gloves’ Gainey, who clinched maiden PGA Tour glory at the McGladrey Classic on Sunday and became the first ever contestant from the Golf Channel’s Big Break programme to make it on the PGA Tour back in 2008, fired a closing 60 to overhaul a seven-shot deficit in the final round at Sea Island Golf Club.

The 37-year-old from South Carolina wears two gloves - because he came to golf from baseball – and owns an ungainly, yet funky-looking swing that is entirely homebuilt.

From this swing sequence you can see Gainey has a neutral stance but is very bent over at address. He also wraps his right hand underneath the club and sticks his left thumb completely off the club.

Into the swing itself and Gainey dips his head dramatically. His transition begins before he reaches the middle of the backswing and there is an enormous dropping of the hands from the top to the hitting zone. His left wrist bows considerably as he lays the club off in an exaggerated fashion - not dissimilar to that of Graeme McDowell.

The result is a powerful lash that compresses the ball to the max. Gainey is the perfect example that this beautiful game allows for an incredible amount of variation in technique.

To see a video clip of Gainey's swing, click here.