We take a look at one of the smoothest swings in world golf... 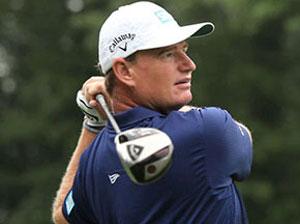 To celebrate Ernie Els’ 44th birthday today, we take a closer look at the powerful, rhythmical, balanced swing which earns him the name The Big Easy.

Els, who claimed his 28th European Tour title earlier in the year at the BMW International Open, is considered to have one of the best actions in the game - as you can see from these snaps from the 15th tee at the BMW PGA Championship earlier in the season.

The four-time major champ positions his Callaway HEX Black Tour just inside his left leg. The width of his stance is just inside of his shoulders.

Els looks comfortable, poised and balanced with his arms hanging in front of him. There is no real tension in the arms and he has very light grip pressure. He flexes his knees before keeping a straight back and then shuffles his backside several times to feel his way into the shot.

With that tension-free grip, Els slides the club through his arms, getting his left shoulder behind the ball, which enables him to engage his mid-section at the takeaway.

A key to Els’ power off the tee is his wrist action. His left arm is parallel to the ground and he sets the club at more than 90-degrees in relation to the ground. From that position, he can turn to the top and let his swing uncoil smoothly.

At the top of the swing, Els moves his lower body back towards the target just before the club gets to the top. He does, however, cup his left wrist at the top and release the club very late in order to fight his tendency to hook the ball under pressure.

Into the downswing and Els likes to feel the driver drop from the top by moving his right shoulder down and slightly under his left. You can also see his right foot comes slightly off the ground to increase power and achieve clubhead speed of more than 120mph.

At contact, Els whips his Callaway RAZR Fit driver through the ball with great speed, as his arms and chest uncoil around his left leg.

To finish, Els retains his spine through the swing and poses for the cameras.