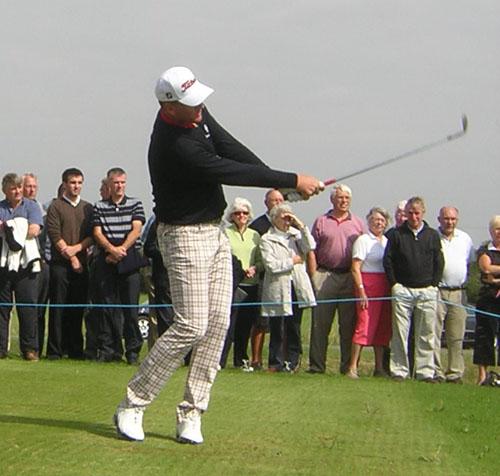 Golfmagic caught up with Robert Karlsson at St Ives Golf Club in Huntingdonshire this week (just hours after he finished just six shots behind winner Martin Kaymer in the US PGA Championship), when he opened the new clubhouse and the Titleist fitting centre. The 2010 Qatar Masters champion revealed some of his playing secrets in a fascinating clinic. Here he talks about the importance of...

A lot of people ask me how far we hit the clubs in our bag. Well I can tell you when I started playing  profesionally in 1989 and on the Tour in 1991, the 9-iron was going 130-135 yards.  For me now with modern equipment, my 9-iron means a shot of 150 yards. My irons are one inch longer than standard because I'm 6ft 5 in. The irons are also 2-3 degrees more upright than standard which makes them play a bit longer.

But the real different for professionals is the introduction of new Rules on grooves for the Tour pro. It has made us think much more about regulating our ball flight. These new Rules don't allow us to spin the ball as much as we used to so we have to achieve the same results by hitting the ball higher or lower, and working it left or right, which isn't as easy with the modern ball which is developed to fly straighter.

Remember too that when playing into the wind, being able to regulate your ball flight is very important.  My advice is always don't try to hit the ball much harder, just make sure you position it
a little further back in your stance.  This way you will control the flight by hitting it earlier in the swing path.

And down wind when you want to give it some air move it slightly up (forward) in your stance. But take special care because there's a tendency to hit it fat, just like I did then!