Why short-shots are the key to low scores 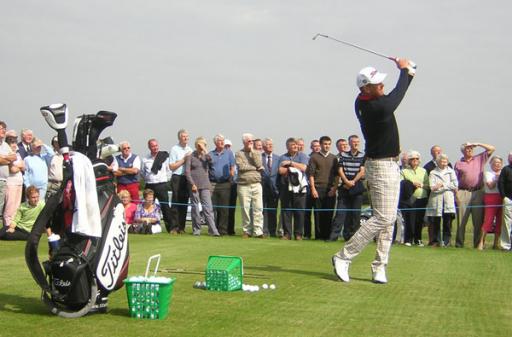 Reignng Qatar Masters champion Robert Karlsson, the first Swede to be Europe's No.1 in 2008 and who won the World Cup with Henrik Stenson in 2008, ths week opened the Titleist fitting centre at St Ives Golf Club in Huntingdonshire (just hours after finishing 16th in the US PGA ). Golfmagic caught up with him for a short instrctional series. This time he stresses...

Why short-shots are the key to low scores

When I warm up I start with my 60 degree lob wedge with some shortish pitch shots.

This is the biggest difference between the pro and the amateur - being able to get up and down from between 30 and 100 yards. When I'm doing a clinic, I know everyone wants to see me hit the driver - that's pretty much how it works - but I'm going to hit five to 10 of these pitches just to show you that if you're trying to improve your scoring, these clubs form the most important part of the game.

In tournaments if we are going to put a good score together, it is generally from the par-5s. Some we can reach in two shots of course, but even if we hit a bad shot we can generally lay up and rely on a pitch and putt for our birdie.

I know that the amateur golfer tends to look at us and admire how we drive the ball but for us as professionals, pitching, chipping and putting is pretty much the foundation of our game.

I was reading the other day the statistics of Tom Kite when back in 1985 he broke all the money-earning records. Over the whole season from 75 yards and in, he averaged 80 per-cent in getting up and down.  And that's from every kind of lie and position - from plugged bunker shots, from chips,  behind trees and bushes - that's everything. It's an amazing statistic.

If most amateurs are getting down in three shots from that distance they'd feel that was okay but Tom was getting the ball in the hole in two shots, eight out of ten times. He didn't need to take on too many par-5s because he knew he could lay up and still get up and down for his birdie.

Remember, too, that if you're going pitch and chip well, it's important to hit down on the ball. Keep the weight on the left side a little bit and make an aggressive shot through the ball with hands slghtly ahead at impact. No scooping; let the loft do the work.

By the way if you ever see some of the junior members at your course just hitting driver off the practice tee, tell them they will get a strongly-worded letter from me! Tell them to get their short game in order first and work on it when you're warming up!