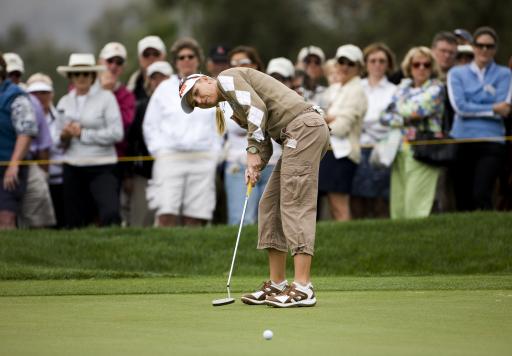 As the greens become smoother, firmer and faster through the summer months, the ability to hole more putts becomes even more crucial in converting bogies into pars and pars into birdies.

So putting consistency is a must if golfers - both men and women - want to improve their scores. And the key is creating a putting stroke that is so ingrained you don't even have to think about the technique, merely concentrate on pace and line.

I've always been recognised as a good putter, in fact, as an amateur I was renowned; it was my main strength. When I hit the green in regulation my opponents were worried. I could hole them from anywhere!

I'm still a good putter but in the pro game holing putts comes from confidence and sometimes it can leave you questioning your own technique and ability.

So it was quite hard for me to go through a bad patch recently because I'd never had one before. I didn't know what made me good - it had just 'happened.' So I had to really search to retrieve my secret - looking through old photographs, old video footage as a youngster when I was putting.

I'd lost confidence in recent months. I just didn't see the lines any more and didn't know how hard to hit the ball. You need to get the pace first then you need to know how hard you're going to hit a putt before you can pick the line for that pace. I seemed to have no feel at all.

I've since worked it out and I'd like to share it with Golfmagic.com members in the hope that you can become a solid and consistent putter, too.

I use a Ping Redwood Anser putter, having recently switched from a TaylorMade Rossa Spyder which I use on slower greens because of its extra weight in the head. I prefer the lighter-weighted Ping because I can stroke it more smoothly rather than fight with the heavy putter on faster greens. It also suits my traditional style of putting.

I've had the same technique since I was a kid. Hands in right-below-left position with the left forefinger overlapping the right hand's knuckles. It's a very neutral grip and suits the way I putt. I tried cack-handed for a while last year (left hand-below-right). It wasn't a bad decision; I putted pretty well but was always struggling with confidence and I never felt comfortable.

I position the ball pretty central in my stance but, contrary to many putting 'experts', I never have my eyes directly over the ball. I've had so many coaches trying to get my head over the ball and I just can't do it; it doesn't feel right for me. I've always had an in-to-in putting stroke (slightly inside the line on the way back, square at impact and inside again) and if I get too much over the ball I feel I have no way of making my traditional stroke.

As I'm walking up to the green I'll have a look at the bigger contours in the green. But I don't study them too much because you can over analyse and talk yourself out of a putt as I've done in the past. I'm now trusting my gut [feeling].

Before putting I'll look at the line from both ends of the putt to give me a good indication of the line and I'll also watch my playing partners' putts very closely to spot any late breaks.

Unlike many golfers I tend not to mark any lines on the ball. Again it tends to over-complicate putting if you're trying to feed too much information into your head as you putt. You might not have the mark quite lined up, so you try to compensate and it can distract you from the pace of the putt. I line up on the blank side of the ball.

As the next part of my pre-shot routine I make two practice swings to try to feel the pace before placing the clubhead behind the ball and adjusting my feet. I look at the line I want to take and visualise the ball rolling along it into the hole.

I've always had a forward press in my putting stroke, which brings my hands a fraction ahead of the ball at impact. I feel that if my hands are behind the ball at impact, I'll miss it right. It also helps keep my left wrist strong and firm and towards the target line.

My fault, I discovered through looking at old pictures, was that my left wrist was 'breaking down' (loosening) at impact - one of the reasons I went cack-handed for a time.

*Don't complicate it with over analysis and lines on your ball

*Clear your mind of technique

*See the line and feel the pace

Golfmagic.com is grateful to the Tenerife Tourist Board for its assistance in this feature, written and produced during the Tenerife Ladies Open in June. For more information about facilities on the islands, visit Tenerife Select at www.webtenerife.com