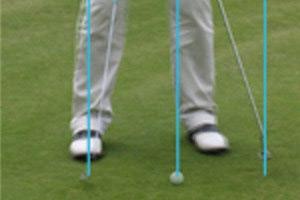 Jason Gilroy is a putting coach based at The Golf College in Lindfield, West Sussex. He was among the first users to set-up a dedicated indoor putting studio using Science & Motion Golf Technology and is keen to show Golfmagic users what they can learn to help them improve their game.

In the first of a short series of instruction articles he reveals how to explode some putting myths.

Myth No.1: Extend the putter head down the line to get the ball to the hole.

"Follow this advice and your putting will only get worse! It encourages even more problems in the stroke and not just loss of distance control.  ?

?"First you need to understand why you're struggling to get the ball to the hole. Here's some likely scenarios:? ?

1.You've shortened your putter but not altered the head weight. Now it feels lighter?

?2.No matter how long your backswing, you still leave putts short

?3.You consistently hit putts long as well as short  ?

"All the above can create an acceleration-related issue...but why? Rather hit the ball harder and risk over-accelerating after impact, which can result in the ugly long follow through, think about the following:  ? ?

1.Is your backswing too long for the length of putt, forcing you to decelerate, quit on it and chase after it in the follow through?

2.Is your backswing too short, reducing power and demanding you attempt to hit at the ball?  ?

3.Your backswing's too slow so you rely more on a hit than a swing to generate the energy to get the ball to the hole

4.Do you swing back too quickly, then decelerate to control the putter head speed?  ? ?

"There is only one effective way to ensure you achieve consistent and controllable acceleration throughout the stroke!

Work on creating better symmetry between your length of backswing and follow through by placing tee-pegs equidistant from the ball (front and back) then roll some putts down the line and see how far they go. It's a drill that will help you establish how far your putts roll from a given length of stroke, back and through.

Simply shorten or lengthen the stroke depending on the putt length.  ? ?Varying the length of stroke generates different putter head speeds and pace of putt but make sure your tempo isn’t too slow or you'll feel you have to overswing or 'hit' at the ball to get it to the hole.  ? ?

Remember, when facing a slippery down-hill putt, don’t worry about hitting it softly. Make a shorter backswing and imagine you're hitting a shorter putt, trust your line and let the slope do the work!

For example if you have a 15-foot down hill putt, you may have to imagine the hole is only three-feet in front of you.