Why I love golf... with Manchester United legend Teddy Sheringham

Teddy Sheringham, the former Manchester United, Spurs and England striker, on why he is more interested in golf than football these days... 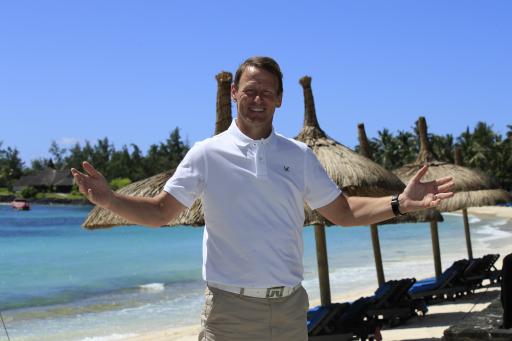 Why do I love golf so much? I analysed my life 10 years ago after finishing playing football and you could tell I was getting agitated because of the lack of competition, Manchester United legend Teddy Sheringham tells golf journalist Chris Bertram.

If I haven’t competed in anything for maybe three days I become very agitated. If I haven’t had a game of tennis or a game of cards - I used to play a lot of poker - even 12 hours feels a long time without some competition. Competitiveness is what it’s about.

I’m obsessed by golf now in the same way as I was obsessed by football as a 12-year-old wanting to be a professional. That’s all I wanted to do, all I thought about and all I dreamed about. I want to get better at golf and see where it can take me even though I am 55 now.

I probably watch more golf on TV than I do football. Football is on every night and I pick the big games to watch whereas I can’t get enough golf.

I didn’t have lessons for about five years but I’ve just started having lessons with a guy who also played in the Legends Tour finale at Belle Mare Plage in Mauritius, Chris Baron at West Essex. I started seeing him about five months ago, just to try and put me right and he’s been very helpful.

As for how I first got involved with golf, a mate of mine down at Millwall years ago used to take me to training as we lived in the same area and he was a very good golfer. He told me one afternoon that he was off to play golf, and then it became the next afternoon, and the next afternoon, so I thought to myself that I better come and see what's so good about the sport.

Fast forward to today and I am now a member of two golf clubs, West Essex and Prince’s in Kent and my handicap is 4.

My all-round game is average but the best part of my game is managing to put things behind me after hitting a bad shot. So I would have to say my mental strength is pretty good out there, as long as I don’t hit too many bad shots in a row!

What makes me like a golf course? A lot of the time, when I look back down a hole that I’ve just played and go ‘wow, look at that’. Also when I walk up to a tee and go ‘wow’. So I suppose it’s the scenery and the look. I am very much a visual person.

As for my favourite courses that I've played down the years, I would have to include my home club at Prince's. I can't believe my luck to be a member down there. I feel very fortunate that I can play on the coast, it's just a beautiful place and there are 27 great holes. I am so appreciative of being a member there.

I used to be a member of The Wisley and that is a fantastic course, too. I consider it one of the best clubs for competitions, fun, people and food.

There’s a course in Augusta, Sage Valley, that was built by a guy who wanted to become a member of Augusta National but couldn’t so he built his own course. It’s absolutely stunning, and very very similar to Augusta.

I also love Loch Lomond and I love Kingsbarns. I love links golf in general.

Augusta is top of my hitlist and hopefully I can play it in the next couple of years when I’m too old.

I’m lucky to play so many fantastic courses; for the final of the celebrity event on the Legends Tour we got to go to Mauritius and play the Legend and Links courses at Belle Mare Plage, in the sun in April… it doesn’t get much better.

Another one would have to be Bobby Moore. I'd love to bring him back and have a game with him. Kenny Dalglish, my hero growing up, would have to be in there. l love Kenny and love being in his company whenever I get the chance. I'd also include Jessica Alba.

As for one of the funnier moments I've seen on a golf course, I was out in Spain a few years ago and we had all teed off. My brother was then next up on the tee. There was a big oak tree some 50 yards in front of us. He hits the ball a bit skinny, it's low and to the right and he's hit the oak tree full on. The ball came flying back towards us and we had to all jump out of the way. It must have flown another 50 yards past us so he was laying two from minus 50 yards!

What made Sir Alex Ferguson such a genius?

What was Roy Keane really like in the dressing room?

Is the infamous Dentist’s Chair in your top 10 nights out?

It probably looks that way doesn’t it. I’ve had some great nights out over the years but that’s the one that gets mentioned more than any other but yeah I’d chuck it in the top 10.

For more information on playing with celebrities or Tour pros in the Legends Tour, visit legendstour.com.